Does friction only apply in opposite direction of motion?

Let's say an object is sliding on a slope and is the object has a velocity of (0,0,5). The friction would be acting in the opposite direction of motiong, being (0,0,-1).

I find the notion that friction always opposes the direction of motion strange, because this means that when an object is sliding downwards slightly on a slope, but not much, due to friction acting in opposite direction of gravity, when you add an impulse in a perpendicular direction, suddenly the object will be sliding downwards much more because friction is no longer resisting gravity. Is that correct? 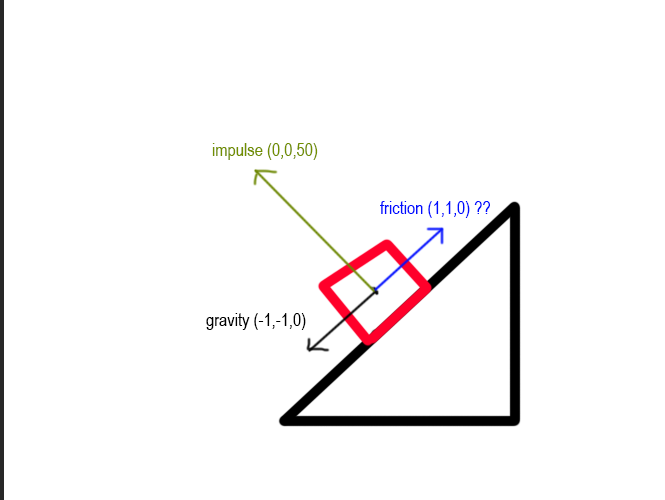 Friction is directly related to velocity.
Gravity and other forces might cause an object to accelerate, changing its velocity, so they indirectly affect friction.
But they do not appear in the friction equation, for example in the simplest case you have:

However, in more complex models, the coefficient \$k\$ can also depend on the normal force at the surface, which is itself proportional to the object's weight.

1
How do I apply a force using the object direction and speed?
3
Friction due to gravity in an impulse based physics engine
2
Calculating/Predicting a way
3
Spritekit - gradually apply force vector in different direction (space ship turning)
7
How to apply friction vector to acceleration in top-down 2D game?
0
EnemyAI rotating on Y-axis in opposite direction