How to either draw a group of tiles completely behind or completely in front of a player?

Say you're rendering a 2D top-down tile map and there are some objects in the tile map that the player should be "in front" of when below them, and "behind" when on top of them. Like in this example screenshot: 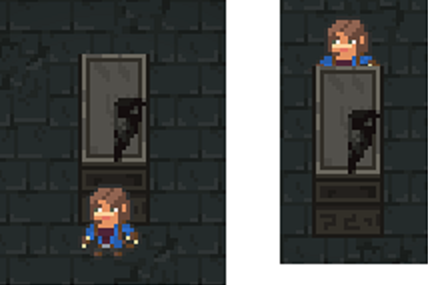 This works because the player is on layer 1, the top two tiles are on layer 2, and the bottom tile is on layer 0.

Let's say in this example that the object has no collision. If the character then walks up, then the character will be half-in-front and half-behind, like this:

The reason why this is a problem is because with tiles, they don't really have a concept of state. If the 3 tiles were part of the same "object", then this wouldn't be a problem, because we could just render the entire group of 3 tiles as a single sprite, and then sorting could be done, and the entire sprite could be rendered behind or in front of the player.

However, with tiles, this knowledge isn't known, as they are purely decorative numbers.

One possible solution is just to instead forsake tiles for these sorts of objects, and force them to be entities in the game itself as opposed to just tiles, but because there can be many of these, that would be a performance hit. It also complicates the logic.

Is there any better solution?

This problem is usually worked out by collisions. Hopefully your tile editor allows you to set groups of tiles together along with their collisions, so you don't forget to set them. And that's it.

However, there might be parts of a game where you need to support something like this, and there is a way to do it that is not making everything entities…

As you know, if you use multiple layers of tiles, you can have some be drawn before the entity, some after.

If each "object" exist entirely on a layer, and entities are never on that layer, then entities are either drawn "behind" or "in front" the "object".

For the example depicted in the question, you would have layer 0 be the ground, layer 2 be the object. And, depending on where the entity is, it can be on layer 1 or layer 3.

Consider for example, a bridge. Entities can walk either above or below it. Depending on the direction from where they approach it. For that case, you can have constraints that set the layer of the entities appropriately on the sides of the bridge. You can even have triggers on the edge of the bridge that change the layer and play a "jump down" animation, only for entities that were top side, of course. And yes, if you are using a system where you need to set triggers per tile, that can be a lot, thus probably not a feature of every map.

Not the answer you're looking for? Browse other questions tagged 2d rendering tiles tiled draw-order .

1
How do I draw a sprite on top of a video in Andengine?
1
Units, Layers, and Isometric Ordering
1
How can I optimize performance when updating tiles?
0
Top down tile based game render order
0
How to draw a character behind and in front of a building? (isometric map)
0
Depth sorting issue
0
Effective solution for showing the outline of the player sprite when behind objects or tiles that are meant to be in foreground
1
Dynamic Sort order For walking in front and behind stuff