Ask Question
Asked 6 months ago
Active 1 month ago
Viewed 81 times
1
\$\begingroup\$
Closed. This question is off-topic. It is not currently accepting answers.

I am trying to make an inventory system in Unity with ScriptableObjects and a text driver that displays the contents of an inventory. So far the code looks like this:

-An InventoryObject is defined as having a "Container" List of ItemObjects (simple scriptable objects, they just have a little information on the object as its sprite, its name, and whether or not it is stackable) and some methods to properly add or remove items (taking item stacking into account) from that list. https://pastebin.com/t4P3aGmi

-A PlayerInventory is a script that will be carried by the player's character. It contains a method for adding items collided with to its assigned InventoryObject instance. It also contains an OnItemPickedUp event that takes its InventoryObject instance as a parameter and passes it to listeners like UpdateDisplay. OnItemPickedUp is raised whenever a collision with a compatible item happens. https://pastebin.com/RsV7XYPp

-An UpdateDisplay script that listens to the OnItemPickedUp event and subscribes the ProcessInventoryToSingleString(InventoryObject _inventory) method, that subsequently calls several methods to transform the contents of the InventoryObject's Container list into a single, formatted string. https://pastebin.com/N0nsvcWH

-The items are represented by giving a GameObject with a collider2D, aSpriteRenderer and script that contains the particular ItemObject's data and sets its SpriteRenderer's sprite to the ItemObject's.

The problem I'm having is that the method subscribed to the event is being called more than once for each time the event is raised. as shown by the debug logs. Sometimes it's called twice, sometimes even four. This results in my UI display showing more items than there are. https://files.catbox.moe/afa467.mp4

Here are pictures of the console debug logs: 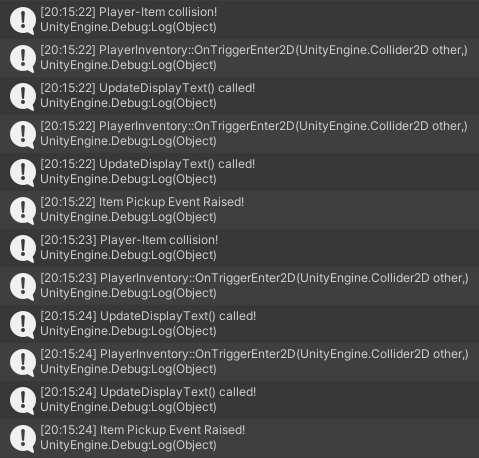 I appreciate any help.

EDIT: These errors also appear. I'd like to believe that they're unrelated.

I fixed it. There was a duplicate script subscribing twice to the events, but deleting it didn't fix the problem. The problem was in InventoryObject's AddItem() function. I forgot to add a Break; statement to the first Else, and that screwed everything up. Here's what it should look like.

Not the answer you're looking for? Browse other questions tagged unity events inventory or ask your own question.

1
How can I store a large amount of items in a space-efficient manner?
3
Ideas/suggestions to implement an item combination system
0
Is it possible that elements in the StreamingAssets folder are not read in build?
0
Item functionality with database
1
Do inventory items have to live in the game world?
0
What method could I use to avoid using a lookup table for each item when loading a players inventory?
1
Inventory objects not persisting between scenes?
0
How do I make an actor move to the foreground temporarily in LibGDX scene2d?