I have camera across a very weird issue where my batches count significantly increase if I enable GPU instancing: Before applying GPU instancing" 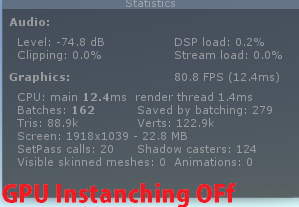 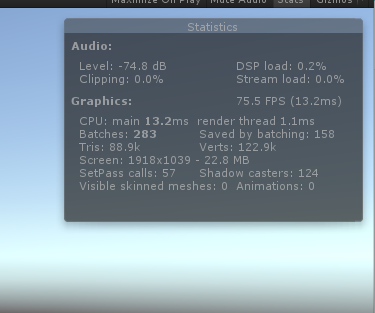 I have a pylon object where i am sharing the material with standar specular shader.

There are a few different ways we can combine objects for rendering.

GPU instancing gathers together a buffer of vertices with a buffer of instance transforms, allowing you to draw many differently positioned/rotated/scaled copies of the same object in a single draw call, as long as they all use the same material. This also saves some VRAM/bandwidth, since you're sending the vertices just once, rather than again and again for each instance.

Static or dynamic batching does something similar, but accomplishes it by baking the transformations for the instances into one big vertex buffer, containing multiple copies of the object(s) in different positions/rotations/scales. Unity can do this either at build time (static batching), or at runtime (dynamic batching). This costs more memory and bandwidth than instancing, but it can combine multiple different source meshes into a single call, as long as they're small and all use the same material.

In this case, it sounds like your scene has a lot of different meshes using the same material. So when using the static/dynamic batching, Unity is able to combine them into mixed batches, containing multiple different source meshes. That lets it send fewer draw calls in total.

When using instancing, Unity can't combine different source meshes into the same batch, so it has to keep them separate, resulting in more batches in this particular scene.

Some things that could tip the scale:

Because of all these different trade-offs here, the engine can't always pick the best option efficiently on the fly. That's why it's so important to profile, as you've been doing. In your case, it looks like not using instancing is slightly better for this scene, so you can use that information to tune the performance of your game.

Not the answer you're looking for? Browse other questions tagged unity shaders optimzation or ask your own question.