Unity Editor extension to group scripts attached to an object

Now it becomes hard to navigate all the scripts when you want to see only a specific feature related scripts.

So, what I want to do is to add some kind of grouping separators in my Inspector view, which would separate groups of scripts from each other.

Of course I know about the following improvements:

But still I feel that having the separators would make my life easier.

E.g. as the red lines on screenshot separate script groups, I would like to have something similar in the editor: 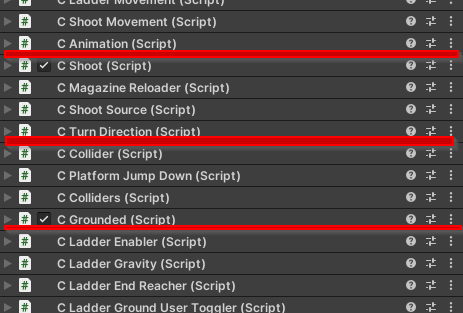 I found some documentation related to my question: https://docs.unity3d.com/Manual/editor-PropertyDrawers.html. But it seems that I can only customize the look of a specific script or property, but not the Inspector view. Is it so?

I strongly recommend consolidating your scripts so that you don't have hundreds of components on one GameObject. There are many reasons not to get this carried away with components, some of which I mentioned in my comment. Breaking functionality into reusable components is good. Having 15 components for climbing a ladder and 10 components for jumping is getting carried away.

Property drawers are not the correct solution. What you want are custom Editor Windows.

You can use a custom Editor Window for editing multiple components at once with a custom interface. However, if you have hundreds of components on each GameObject, expect to spend many many hours writing all of the relevant Editor Windows. Personally I think your time would be better invested consolidating some of your component scripts.

Not the answer you're looking for? Browse other questions tagged unity editors .

7
Can I write plugin/extension to Unity editor?
1
A few questions about integrating AudioKinetic Wwise and Unity
1
Unity3D Tag as a public variable in editor
0
Enum or Inheritance for event-based interaction?
1
Unity SceneView Positionning object with mouse position in Editor script