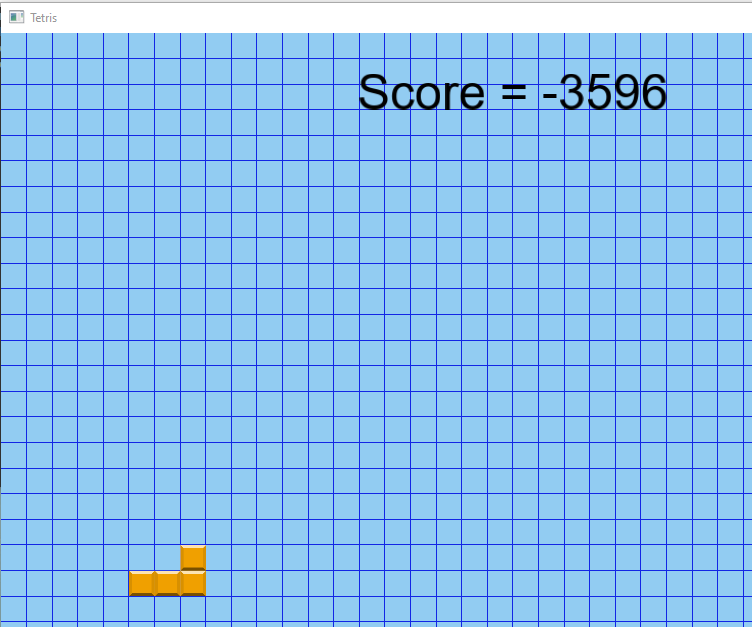 The image above shows the board. Each cycle of the rendering or game loop redraws everything, viz., the light blue background, the grid, the individual game pieces (one shown) with the latest one added moving every 300 ms, and the text score display. I have moved all the repetitive code out of the loop, e.g., that which sets the location in shaders for uniform constants.

I ran timing analysis on 4 sections of the rendering (game) loop to see if I could find a recurring problem. The 4 sections were drawing the background and grid, the game piece(s), and the score. All of them were mostly low time, on the order of 0.001 to 0.01 milliseconds, except for an occasional 35 to 400 millisecond spike.

The Windows 10, x64 computer I used has 2 video graphic cards. They are Intel UHD Graphics 620 and NVIDIA 2GB GeForce MX130. The former is used for everything on the system by default while the latter has to be specifically assigned for any given executable.

I assigned the Tetris release executable to the NVIDIA card and the problem disappeared. The times for the 4 drawing sections were also far more consistent, i.e., had a lower standard deviation.

I suspect that the Windows system was demanding the periodic use of the Intel graphics system relegating my application to a lower status during that demand.

This does raise the interesting question of what happens when my Tetris is deployed to a system with a single graphics card. I do not know if the game can be made a priority so it does not do herky-jerky movements.

Not the answer you're looking for? Browse other questions tagged opengl c++ visual-studio .