Working in C#/XNA for a Windows game: I'm using Texture2D to draw sprites. All of my sprites are 16 x 32. The sprites move around the screen as you would expect, by changing the top X/Y position of them when they're being drawn by the spritebatch.

Most of the time when I run the game, the sprites appear like this:

and when moved, they move as I expect, as one element. 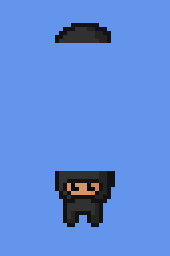 and when moved it's like there are two sprites with a gap in between them - it's hard to describe.

It only seems to happen sometimes - is there something I'm missing? I'd really like to know why this is happening.

This is the main draw routine - it first draws the sprite to a RenderTarget then blows it up by a scale of 4:

This is the draw routine for the Sprite class:

(If you haven't solved it already)

Two things you can do to debug this further (if my solutions are not your problem) and give us more information:

Also, @Blecki, base.Draw simply draws something tagged as a DrawableGameComponent. All the code is doing there is drawing the rendertarget on top of any other automatic draw calls. That shouldn't be a problem.

I would bet my money on the PointWrap, as it will "wrap" the sprite when it is scaled if it cannot scale it uniformly.

I eventually resolved this issue; it was to do with a faulty graphics chipset in the computer I was developing on. A new graphics card was required.