I have a player and a camera on it. I want to automatically move this player towards a target object and stop it when target object completely "fit" my camera.

So my question is : how can I find target Vector3 player position, and camera rotation (up/down) to perfectly "view" an object ?

Consider that my target objects are simple Box. 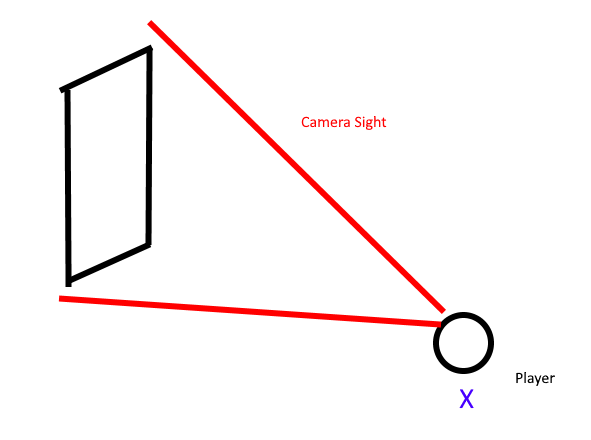 Disclaimer: I don't use Unity or C#. All Unity-specific information was obtained from the documentation and not tested.

The field of view angle (FOV) determines the ratio of an object's size to its distance from the camera.

First, take the FOV and divide it by 2 (to get the angle from center rather than edge-to-edge, which is necessary by the next step) and, if it is in degrees, convert it to radians.

Then take the tangent of the angle. The tangent function tells us the slope — the ratio of distance to sideways movement — corresponding to the angle. (Another interpretation of this is “if an object is 1 unit away from the camera, how big will it be on screen?”)

Then, take the size of the object in terms of its radius or the maximum distance from its origin to an edge (supposing that you want the object to be as big as possible while still fitting in the camera's frame), and divide it by the tangent.

Now you know how far away the camera should be and you can steer it there.

Note that since screens are not square or circular, this will only perfectly fit the object in one dimension, unless the object has the same aspect ratio as the screen. Instead, the screen effectively has two FOV values — horizontal and vertical.

How you handle this will depend on how you intend your game's UI to scale to different screen aspect ratios, but a place to start is Unity's VerticalToHorizontalFieldOfView (and the corresponding vertical to horizontal conversion if needed).

Not the answer you're looking for? Browse other questions tagged unity c# camera .

1
How to make an object move again after being stopped by collision in Unity?
0
Unity 2D - Object following target instead of moving towards it
5
Camera follows player but how to stop camera moving when player moves
2
Getting player cube to move left or right in relation to camera based on camera's rotation
0
Visualize BoxCast
1
Move an object to a point relative to the second camera
0
Move Camera After Player Moves Certain Distance
3
How to completely stop the camera from clipping into the ground