Why do Dynamic Bones disconnect natural flow if they have ANY child gameobjects? 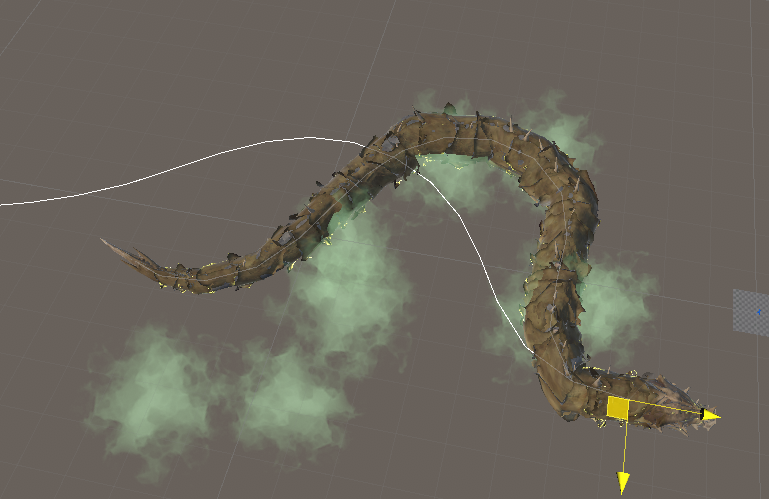 Behavior WITH gameobject under one bone in the Dynamic Bone Chain: 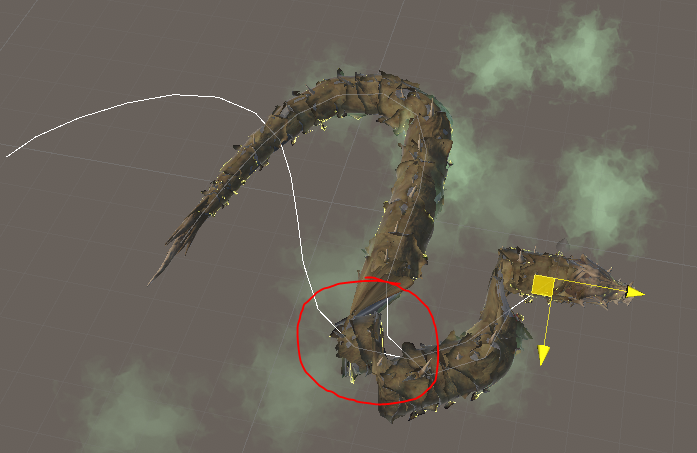 This is the block of settings I have available to edit with my existing Dynamic Bone script: 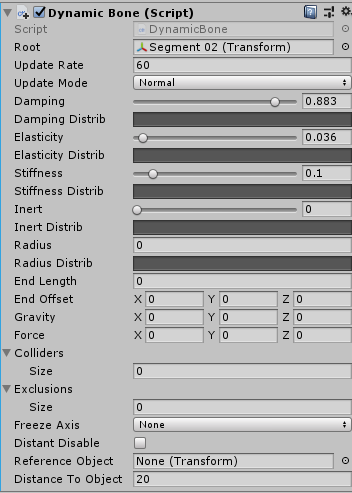 This model is intended to be imported as a functional "Hand Puppet" avatar into VRchat, therefore any major project-side changes to the Unity physics engine will not be carried over in-game. VRchat has blacklisted most scripts for their game with the exceptions of Rigidbodies/Fixed Joints, Constraints, Dynamic Bones, Audio Sources, and some limited functions of Final IK.

As a brief explanation, the reason there are two white lines signifying Dynamic Bone behavior in my screenshots is that I have applied Dynamic Bone roots to two bones on the model's skeleton so that their behavior compounds to create a more fluid and natural motion (at the cost of some performance). My posted concern occurs no matter how many/few dynamic bone components are applied as long as there is at least one component on the chain.

How can I fix this problem?

So I believe the problem here is an interesting form of the age old mass-ratio constraint problem. I’ll explain the high level.

So Unity’s default MLCP solver is commonly referred to as PGS for short. In this (and any) physics solver, a constraint between two objects uses the mass and inertia tensor (referred to as mass properties) of both objects as inputs to determine the impulse required to move both objects such that the constraint’s conditions are satisfied.

In the case of the constraints you’re using, the condition they are satisfying is a fixed distance between the two objects, meaning that the solver will apply corrective impulses every frame, on every constraint, for a set amount of iterations. The amount of iterations the solver uses to attempt to converge on a solution is just an estimate, which means that there can be situations in which the constraint will diverge, especially if a large mass is being carried by a series of smaller masses (i.e. wrecking ball on a chain). The constraints between the smaller masses have no knowledge of the larger mass way at the end of the chain, so they cannot adequately compensate for the effective mass of the large object on the end. I believe a similar situation is occurring here.

TL;DR I believe that the mass of your new child object is not accounted for by the constraints which bind the parent object to the rest of the body, making those constraints unable to converge on a solution. If that is the case, I think there are a few ways to fix this. First, being to disable physics on the child object while it is parented. If not that, you could try making the mass of the child extremely small and removing linear drag from the child as well. It may take a bit parameter tuning and testing to achieve an acceptable solution, and this is a very common practice.

Edit: Other tests/solutions could include parenting the child object to the leading object in this chain. If this fixes the problem, then I would consider my theory correct. Another route would be to try significantly raising the masses of every object in the chain such that the mass of the new child object is negligible in comparison to any segment, though, this may introduce other undesirable behavior as the entire object would have significantly more momentum.

Another similar (albeit far less likely) theory to explain your problem would be that the engine decided to recalculate the polyhedral mass properties when the child was parented to your object, including mass, center of mass and inertia tensor. That would effectively make that segment a compound collider. The shift in center of mass plus the mass ratio problem could explain the behavior. This would be a bit more difficult to fix and diagnose, though. If that was the case, you may need to manually modify those mass properties when parenting and unparenting so that it appears to the physics engine as if nothing has changed.

Not the answer you're looking for? Browse other questions tagged unity models debugging .

0
Why does setting a static member value in MonoBehaviour child class constructor have no effect?
1
Why particle effect alway rendered after UI though they have same sorting layer and same sorting order?