I'm trying to get my 2D top down shooter to use -some- physics.

I want the player and enemies not be able to exist in the same position, in other words, use collisions.

Going one step back, I removed the CharacterController, and rather opted to go the Rigidbody2D route. This worked partially. I now get collisions on my player when he walks into other gameobjects (with RB2D and BC2D on them), but there seems to be a "rebound" anomaly occurring; my player moves around after collision.

I've tried playing around with the settings on the RigidBody2D on the player, but it does not seem to have any effect.

This is my PlayerMovement script :

The settings on my Player : 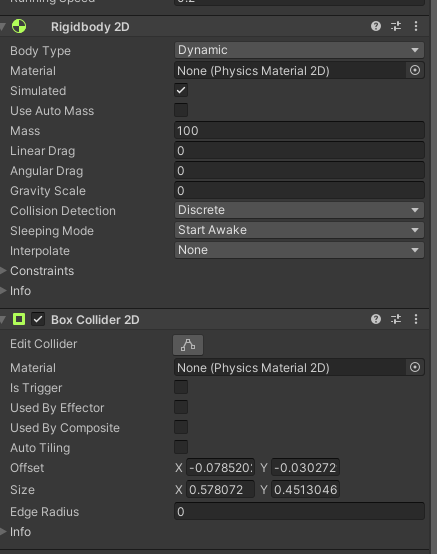 I would like my player to stop dead in his tracks when colliding with another RigidBody2D. Is this possible? And if so, how would I go about doing that?

To prevent things from bouncing, what you want are "inelastic" collisions.

In Unity all collisions below a configurable Velocity Threshold are inelastic. You can change that velocity threshold inside your Physics2D settings. (menu: Edit > Project Settings > Physics 2D).