I would like to move an object through a path found by A* star but taking into account the object's turn radius and movement speed, while also avoiding possible obstacles during a curve. After some research, I found this article in gamasutra about realistic turns and this question. If I understood correctly, to add smooth turns I just need to create a circle in either the left side of the object or the right (depending on which direction it will rotate) and then move the object along that circle until it reach the point in which it can move straight to the goal. I implemented the code from the article, however I couldn't get it working 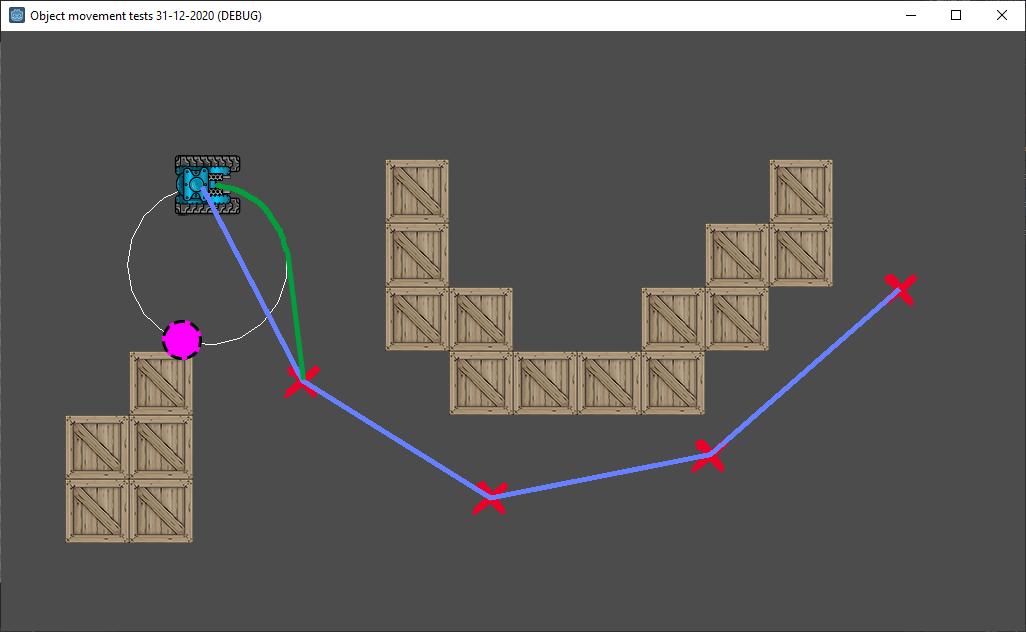 The first problem is that I'm not sure how to calculate the right place for the pink circle. If I understood correctly, it should be positioned between the end of the green line's curve and the start of the straight one.

The second problem is that, once solved the first, I don't know how to actually move the tank through the "circular" path, while in straight path I could simply take the direction between the current point and the next, and move along that.

Here's my implementation in gdscript

Any insight would be appreciated - thanks in advance!

Browse other questions tagged 2d movement path-finding or ask your own question.

10
Enemy movement in straight line to player in chase game
3
Walk to nearest attackable range node
3
Precalculate the position of a rotating Aircraft
0
How to move dashes towards target?
1
Java- Trig based movement
1
Board Game Pathfinding - Finding optimum valid path with limited path distance?
1
Pathfinding with multiple actors moving in sync
1
How can I “smoothen” my path-finding on a map with big tiles?
3
Dodge different type of obstacles