I'm creating a procedurally generated planet object in Unity. I start with a cube which is created from 6 meshes (6 sides) and normalize the vertices to get a standard sphere. The problem is that there are visible seams between the meshes. I know if I set the vertex normals to the direction from the center of the sphere to the current vertex then seams will gone but my next step is to add noise to the meshes to generate terrain on the sphere.

What I already tried to remove the seams:

The second solution is almost perfect but seams are still visible a little bit. 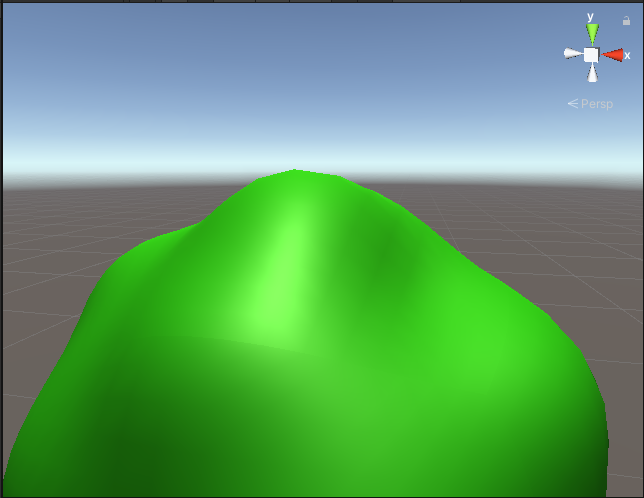 When I create the mesh object:

I use libnoisedotnet to create simplex Perlin noise on the surface:

Here is the noise library what I tried to use: https://github.com/SebLague/Procedural-Planets/blob/master/Procedural%20Planet%20E03/Assets/Noise.cs

Is it possible to remove the seams fully?

Let's modify your simplex noise function to also compute the gradient of the noise field at the sample position. This lets us share the work between the two computations, so it's cheaper than adding a second EvaluateGradient() method or sampling the noise field multiple times to get finite differences.

First we'll modify the signature to give us our gradient in an out variable:

Then we'll initialize our gradient to a zero vector:

Toward the bottom of the function, you'll find four sections that look like this, computing the value contribution from each corner of the simplex:

We're going to modify those to this:

Repeat that substitution for each of the four, making sure to change t0, x0 etc. into the corresponding t1, x1. Or refactor this into a function you can call four times with different arguments - just be careful of the differences in the calculation of the gradient index.

Now in our planet generator, we'll modify your elevation function to also compute the normal vector for the point:

Note that because the only input to this function is the direction on the sphere, when we return to that same direction on another mesh, we'll get the same output (ie. consistent normals on both sides of the seam). So there's no need for the extra skirt geometry to try to force RecaclulateNormals to average-out the way you want.

I'll confess that 25f magic number in there is a bit of a fudge factor. My calculated normals were initially too soft, but I haven't had my coffee yet so I'm struggling a bit to figure out why. It might be because I'm approximating the surface as being locally flat, and the curvature of the sphere has more impact than that. In any case, for now, scaling by 25 seems to bring this in line with the sharpness of shading you get from RecalculateNormals but without the seams. I'll update this if I can find a better mathematical justification for getting the right normal tilt.

If you want to elaborate on your noise sampling - say layering octaves of noise for an FBM/Turbulence effect - you can use the fact that the differential operator is linear. So the gradient of a sum of scaled noise fields is just the sum of their scaled gradients. So as you sum up the elevation from each octave, also accumulate the gradients separately, then convert to a normal as shown above.

Not the answer you're looking for? Browse other questions tagged unity procedural-generation normals seams .

6
Producing a smooth mesh from density cloud and marching cubes
3
What is the cause of this lighting artifact on my dynamic terrain mesh?
3
Removing seams between procedurally-generated spherical terrain tiles
4
Calculate edge loop from plane intersection
5
Calculated normals for mesh not working
0
Unity3D - Mesh appears black in parts that it shouldn't
0
Generated Mesh Does Not Have Shadows/Shading
1
Mesh seams visible in Unity
0
Calculated surface normals for Perlin-noise are weird
1
Calculating distance in procedurally generated mesh LOD system