How to randomly change the color of a Shader Graph Material for only a specified GameObject, with C# script?

I'm working on a game, in Unity3D, where the player picks up trash from Trash cans, and dumps the trash from the Trash cans into a Trash Truck. The world of the game itself is randomly generated, with randomly selected houses, with random rotations, and random Trees, Flowers, etc., etc.. I'm trying to make each one of the houses, have a randomly picked color, for each house. The problem is, I'm using a Shader Graph Material for the material of the houses, so how could I choose the random color, and for each house, not for the entire material, but just the material on each house? Also, I'm using a Vector 1 Node, plugged into the X Input Value of a Vector 2 Node, plugged into the Seed Input of a Random Range Node, which controls a Hue Node. I'm trying to control the value of the Vector 1 Node. Here's the Shader Graph Layout I have for this material:

And here's the current script I'm currently using to (try to,), control the color / Randomize the Color:

I've currently commented-out the bits of code that are supposed to make the color random / randomize the color, since it seems to break another part of my script (I think it's actually the Coroutine, now that I think about it,),.

The way I've set this up is I have a Shader Graph Material, seen in the image above. The property name, in this case, for the RandomColor Vector1 Property I have, is Vector1_172A53D5.

I made a Plane GameObject, I also have two copies of my other Random GameObject Generating Script. (One for Trees, one for Flowers,),. As a child of this plane, I have an Empty GameObject, with this Random House Script on it. I have 5 different House Prefabs under the list of Houses. I have 5 different floats for the Random Rots (Rotations,), 0, 90, 180, 270, and 360. For the Timewait float, I have it set to 0.01, the time it waits before it Re-Generates the Plane's GameObjects, so that to make sure that they don't clip into any GameObject marked with the Tag, "NoSpawn". And for the Rand Gen script, I have it set to the Random GameObject Generating Script from the Parent, Plane GameObject. I have this script set up so that I can press the "T" Key During Runtime to Re-Randomize / Re-Randomly-Generate the Houses and Random GameObjects.

This other, Random GameObject Generating Script doesn't do anything to the House Script, all of the House-Generating-Related Things happen within the script I have here.

Also, here's a current example image of the Random-House-Generation Script, during Runtime. It currently only changes the colors of a few houses, I want all the houses to have a random color,: 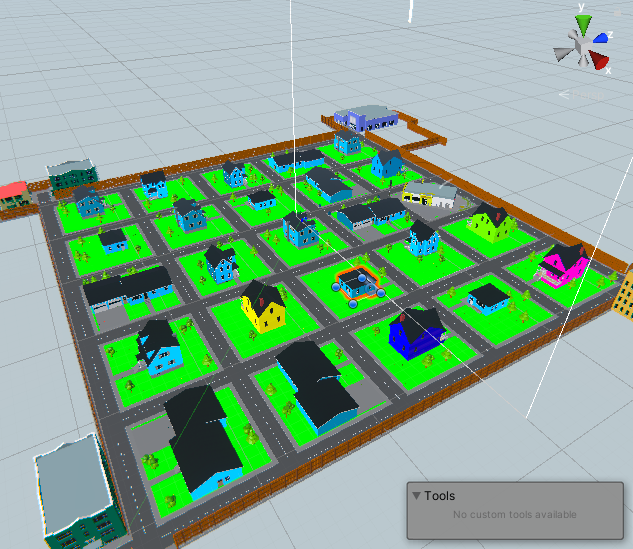 If anyone needs any more information, please, let me know! Thanks!

2
Unity3D draw call optimization : static batching VS manually draw mesh with MaterialPropertyBlock
1
change the position of f3d objects randomly in action script
0
How to set material to gameobject dynamically using c# script in unity?
0
How to use MaterialPropertyBlocks to randomly change the color of multiple materials on an object?
2
How can I bake several variations of a substance?
1
How can i make fade in/out of the alpha color of a material from black to none black?
0
How can I change a shader alpha color in script?
1
Help creating combat for collection type game
1
How to completely stop the camera from clipping into the ground
6
How to change material color (LWRP)