I am not sure how to set the angle of the camera, I see there is an up vector, but its values seem to be limited to smaller values than 30 or 45. With this camera setup It appears to be isometric, though I'm not sure why.

This has the cube at position 0, 0, 0 at the top of the screen. This picture illustrates what I am seeing approximately: 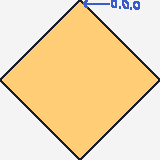 If I change the position of the camera to:

Then I appromxiately see this: 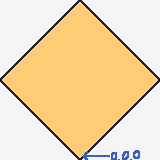 Although it appears much higher on the screen. How do I go about rotating the camera from the first picture to the second picture? Also, how do I rotate the block at 0, 0, 0 to any other corner if the map has an even number of rows, columns?

I should add that simply tweening from 10, 7.5, 10 to -10, 7.5, -10 eventually does get to the second picture, but it inverts the map first (looks very strange), I want a circular rotation towards the second picture. The Orbital camera mode almost does what I want, but it seems move the map as well.

3d isometric raylib
Share
Improve this question
edited May 15 at 5:04

Browse other questions tagged 3d isometric raylib or ask your own question.

1
Collision Detection with Isometric Map
8
Routes on a sphere surface - Find geodesic?
9
3D Camera Rotation
4
OpenGL light appears to move with camera and changes with object rotation
10
Rotating a 3rd person camera toward a target
0
Isometric circle on map
3
Rectangular selection on isometric map
3
Why when I do an isometric projection do I get a "dimmetric" view?