I am trying to animate a model in my project, and although I have been successful doing the same in other projects, I am not succeeding in this one.

The model does not seem to animate, although in the Animator window, everything looks fine, transitioning from one state to the other and going back.

I have followed the tutorials to import animations from the site where I downloaded the animation, and each animation is the same as other working animations in other projects: 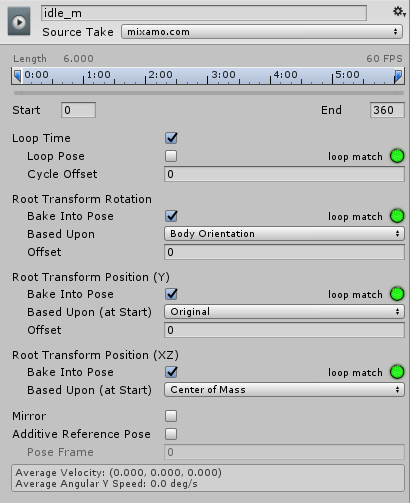 The animations play as expected in the inspector window.

I have tried modifying the "Apply Root Motion" in my character and it does not work either way. My Player model has these properties: 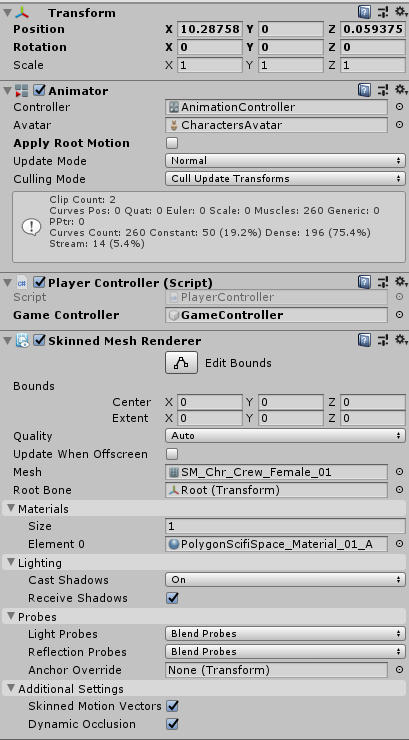 And I have tried adding a Rigid Body but it didn't work neither. I have spend several hours trying to solve this issue and I am running out of ideas to try. How can I make the animation work as expected?

After some more hours trying to figure it out, and testing all the possible combinations, my animations play if I set the "Animation type" inside the "Rig" options of the animation, from "Humanoid" to "Generic".

It is really weird as in another project, with the same assets and configuration, it works well with the "Humanoid" option selected. 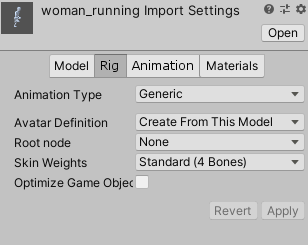 Whenever you import a mesh, you can import it as legacy (has their own animations baked into the mesh), or humanoid (not having any animations on their own, but having the requiered bones to pose any compatible animation). Some designers actually provide both in the same mesh. The generic, of course, cannot use humanoid animations because it does not have the required bones to pose them. Thus, what seems to happen here is that your mesh has both...

It is always a good idea to correct the T-pose if needed, especially when humanoid animations look weird.

Not the answer you're looking for? Browse other questions tagged unity animation animator animation-controller or ask your own question.

3
Animations not accepted in animator
1
Animation package from Assert Store not working probably with Unity Model/Custom Model?
0
Unity 5.2 --- Animator window / tab
4
Animation conversion failed: transform for bone not found?
4
How to disable animation root motion
0
Trying to add my model's animation to the animator in Unity but it doesn't work?
1
What causes skating feet in Unity (but not in mixamo or Autodesk FBX review)?