How to handle normal vector when duplicating vertex?

I'm currently developing a UV mapping, such as the UVW Map Modifier in 3ds Max (Not Unwrap UVW Modifier). 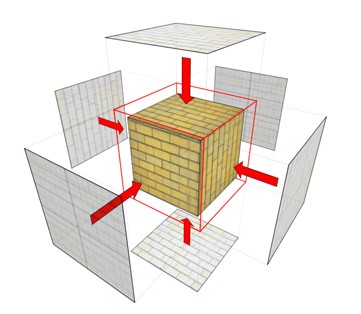 I split the vertices of the model in the form of a primitive shape (Box, Plane, etc.) and set UV coordinates. However, in the process of duplicating the normal vector, i ran into a problem.

The problem is when this algorithm is applied to the Sphere model. Split the vertices of the sphere model into a Box Shape. (Box Shape is one of the functions of UVW Map modifier). Setting the UV coordinates is fine. The problem is the normal vector setting of the seam vertices.

In summary, split vertices may have different normal vectors or may have the same normal vector. How would you like to solve this? (I used the Box and Sphere model as an example, but in practice it should be applicable to a variety of models.)

Add an angle parameter. Compute the normal for each triangle, if the angle between adjacent triangles is more than the parameter angle, duplicate the vertex between them. Each copy gets the normal of its triangle, creating a seam.

Not the answer you're looking for? Browse other questions tagged directx11 uv-mapping vertex normals or ask your own question.

3
How to create per-vertex normals when reusing vertex data?
2
How to determine counter-clockwise vertex winding
1
Skeletal Animation with UV seams
1
Sphere Texture Mapping shows visible seams
0
What is wrong with my normals?
0
MD5Mesh Calculate Vertex Normals
2
DirectX 11 vertex shader incorrectly sending <0, 0, 0> normal vector to pixel shader
1
How can I fix the face/normal direction of my 3d mesh in blender/UE4?
0
How can I split my terrain into quads so that each quad would have a renderable vertex/index buffer? (DirectX11, C++)