I'm trying to make a 2D game where I have a gun that i use to shot things in the direction of the mouse resulting in an angle that I can get. I have some problems with the trajectory of the bullet because I don't know what to put in the Transpose and Rotate function. For example Point 1 has x = 20 and y = 30. I want to shot in the direction of Point 2 at x = 50 and y = 50. To do that i get an angle 't' which I use in the rotate function. But the reality is that I get the animation that I presented in the photo. I increase the x coord of the bullet because I can only shot in right side so only positive x. The bullet is moving on the 0x axis rotated at an angle t but at the same y as the gun. 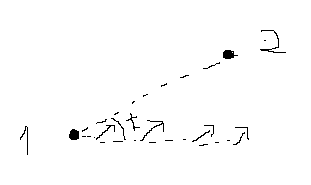 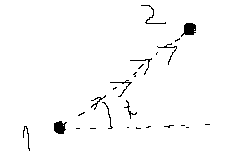 I'm sorry if this is a duplicate I couldn't find a solution to my problem. I think the resulting Matrix should have the form : Translate * Rotate * Translate but I can't find the right x and y.

Sorry if this seemed dumb and thank you for your time!

When the bullet is created, you will place it in p1. That would be something like this:

We need to figure out how it should move.

Let us call d the vector that goes from p1 to p2:

Let us say that the bullet should advance speed distance per unit for time. Then your velocity is:

That velocity describes the motion of the bullet. I'm assuming no gravity, as it was not mentioned in the question. I'm guessing this is a top down game.

I suggest to store it in the bullet:

Each game cycle you will move the bullet by velocity according to the number of units of times elapsed. That would be something like this:

Alright, let us suppose you are placing a model to represent the bullet, and you want to be able to apply a transformation to the model.

We want to have the orientation stored so we have use it to orient the model.

Let us see how the rotation matrix transformation looks like:

We already have those values:

And, of course, you would make your translation matrix from bullet.position.

There is no need to call any trigonometric function. No need to waste CPU cycles on them or introduce floating point errors due their computation.

Not the answer you're looking for? Browse other questions tagged opengl c++ rotate or ask your own question.

4
What is the proper way to maintain the angle of a gun mounted on a car?
1
How to rotate a direction
7
How to implement a basic arcball camera in OpenGL with GLM
0
Rotate heading relative to agent's local space
12
Rotate object around fixed axis
6
Drawing fonts with LWJGL3 with OpenGL
1
Cursor position to a 3D ray using angles
0
3.3x OpenGL Camera - how to do 3d rotation?
0
C++ SDL Bullet shooting problems
0
Understanding how to use Quaternion to rotate object