When to carry on with a buggy game state versus terminate the process?

Imagine a situation where a level/game designer has missed assigning a prefab in one of the game objects' inspector configurations. (I am coming from Unity, but what I basically mean a reference to some object prototype).

In this case we are getting a NullReferenceException which could crash the game.

If we know that this could happen, we can prevent this exception and print something useful to the console.

How should we choose between these two methods?

It may seem like this question requires an opinionated answer, but to me it seems like there is a best practice for these situations and there are vivid pros and cons to each one.

If player continues to play an incomplete game this will result in an incomplete experience which may lead to bad reviews or something like that. But when game is terminated at some point - player may be even angrier that game is not working at all.

My own conclusion is that you would rather continue with the game, but in case of any error logs you would display player that something has gone wrong in the UI.

Unity usually runs fine after unhandled exception has been thrown, so there could be no point to this.

But the problem is that I have a choice between:

The second one seems more appealing since it's really hard or impossible to predict most situations when this could happen.

There are a few considerations here:

Let me get philosophy out of the way. If you think that the goal of game development is to deliver an experience to the players. Then that's it. Remove or hide anything that would break that experience.

Instead, think of giving a good experience to developers, designers, testers and players.

I present to you the concept of environments:

On your development environment, you want to fail fast. The sooner the developer is aware of a mistake, the faster you can fix it, and the cheaper it will be. The cost of fixing bugs grows with time.

On the testing environment, the focus should be on getting the most information. If you can get stack traces, screen shots, a list of recent input, and so on, then do that. That would make it easier to track down those bug that did not happen often enough.

On the release environment, you still want to get as much information as possible. But you should not inconvenience the player. Furthermore, privacy and law comes into play when collecting information. That is something you should address in an EULA.

Thus, I'm saying that the way you deal with an exception, should depend on the environment.

You should also consider the type of exception.

We have exception from which you can't or it makes no sense to recover (such as a OutOfMemoryException).

Then there are exception that you should prevent instead of handle. These are exceptions for developers and should not reach Release (such as NullReferenceException). It could be that the developer missed them and they got into a testing environment. Code review, static analysts, and tests will help you find them.

On a test environment, you want to gather as much information of how they happened. So that the developer can figure out how to prevent them.

And finally there are exception that you should not prevent, but handle. These are exception about I/O (such as FileNotFoundException). For these, get a log, and try to recover and keep the game running. Note that even if you check if the file is there, the OS could preempt the thread after the check and when you use it. That gives a chance to another process to delete it.

Exceptions ere, of course, exceptions. Some systems will hide them, leading to a different exception down the road, one that should not be. It is exceptional. For example, the system loading a corrupted file should throw. Yet, they could have made it return null instead. That will lead to a hard to debug NullReferenceException, which could make its way to Release.

Oh, and null in Unity is a special case, because it isn't actually null.

This reduces the question to: how to handle an exception that should not reach Release, but did anyway? Well, I have one more concept for you…

For example, a saved game is something you did not release with your game, and thus treat as external. Thus, when loading it, the guideline is to use offensive programming. No checks. On a corrupted save file, the system should throw. If it loads well enough to run, and if there is something missing because it failed to load, let it crash.

But a stage is something you did release with your game, and thus you may treat as internal. Thus, when loading it, the guideline is to be defensive. Check that it loads, if it didn't, have a fallback, or disable the content. For example, dialog fails to load, have some default dialog. Nobody should notce.

Note: You do not want the fallback content in the testing environment. Instead, you want testers to catch the problem giving you a chance to fix it.

You should always handle exceptions if you know what they are about, and crash if you don't.

Players overwhelmingly prefer a crash to a corrupted save.

If you want just one single rule that handles any and all unhandled exceptions, the only feasible one is to crash. Sure, it's far better if there is more graceful handling in case of minor/cosmetic bugs - but to do that you need to figure out which ones are minor/cosmetic.

You can handle minor/cosmetic bugs by writing to the log and or implementing a "temporary" workaround. But to decide if a bug is minor/cosmetic you have to first know what the bug is.

it's really hard or impossible to predict most situations when this could happen.

Check this explanation of the 4 types of exceptions: https://ericlippert.com/2008/09/10/vexing-exceptions/
Out of these, it seems that you are talking about the second type; boneheaded exceptions.

are your own darn fault, you could have prevented them and therefore they are bugs in your code. You should not catch them; doing so is hiding a bug in your code. Rather, you should write your code so that the exception cannot possibly happen in the first place, and therefore does not need to be caught.

It sounds extreme, but exceptions are like pain. If you hold your hand into an open flame, you don't want to just be thinking "Hu, that feels funny. Anyway...".

Like you say yourself, "Unity usually runs fine after unhandled exception has been thrown", so during development, catching boneheaded exceptions doesn't give you a considerable advantage. Even worse, it does add more work to do. However, your text seems to be talking about a released game. Contrary to intuition, it's even worse there!

You set the example of a missing prefab. Let's say it's the graphics for your armor in a 2D platformer. Now that armor isn't being displayed, but you can still play. So we catch the exception, write a log message that the armor prefab is missing and accept it as a glitch.

Now the player proceeds and they update their armor. They proceed to play and it seems fine. Then they are done for the day and save it. The next day they try to load the save and it's corrupted.

So now we get a bug report about a corrupted save game. There's a certain, more or less specific sequence of actions that lead to this. Because of our attitude towards exceptions, a couple of other exceptions have been thrown in between - the one about the armor seems like the least likely candidate.
And now you may try and remotely debug this issue, via a third party that is probably a non-developer player, starting with a description of "Loading saved game doesn't work".

The question is of course how "serious" you are about your game - are you even planning to support your game after release? If you're making something similar to Flappy Bird, or those 2000s flash games, the extra effort of fixing exceptions is probably not worth it.

The short answer from me is: You shouldn't ever carry on with a buggy game state. Anything you do carry on with needs to be considered "acceptable" at minimum. While @Theraot was on point with the discussion of environments, in my opinion it's a little bit more simple. Instead of what environment you're running, consider this:

Who is seeing the error?

In terms of responding to a user about crashing feedback, let's go off into a real world example, Minecraft's older error reporting system: Hopper.

On a game crash, a user would be presented with a plethora of information that was seemingly useless to anyone code-illiterate (read: many young children playing the game): 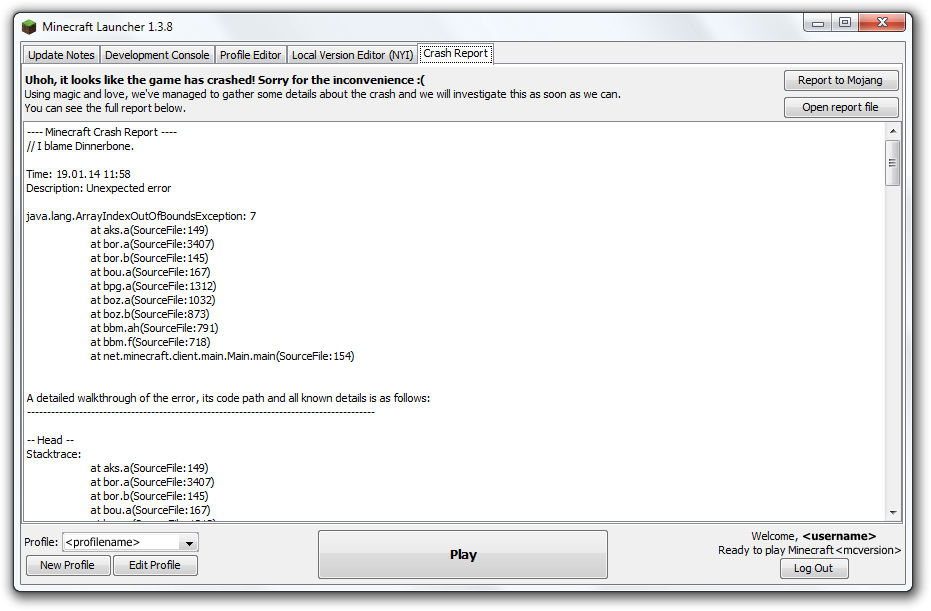 To alliviate this, Mojang added Hopper, which would receive a report from the client of the unique type of crash (e.g. you could hash the stack trace). The service can then have a landing page for those errors, which would provide more specific, user-level feedback about the crash, and how to fix it.

The main point I'm trying to drive home here is that lots of information can be good and helpful. However, in a production environment, sometimes more information can actually just mislead and confuse people, versus a simpler explanation from someone who understands the context of the issue. This also allows you to explain real-world crashes that aren't fixable by developers (e.g. not having graphics drivers installed), and provide remedies for those issues to your end-users.

You should not accept a buggy game state, as simply letting a bug continue onward in your game can leave as bad of an impression on users as your game crashing. But game crashes are much more obvious and likely to be fixed than silent bugs, motivating your developers to not push a buggy/crashing build to begin with.

Not the answer you're looking for? Browse other questions tagged exceptions error-management .

1
Are there conventions on what exactly to log in a game?