I am trying to make a 'single stick' shooter, where the character faces the direction they are moving, but I'm struggling to get the movement working correctly; no matter what I've tried, the player won't move down.

Through some investigation, the issue seems to be that hitting the s key does not return a negative Vertical axis value, and I don't know enough about the workings of the Input manager to understand why.

Here's the code, to check I haven't made a glaring mistake there:

I would love to go tinkering around in the Input Manager and learn through mistakes, but it's a collaborative project where other games using this system are working, so I don't want to risk breaking something by going in blind. Also, those games are successfully using the down key, but mine isn't which makes me think it's something else I'm too green to realise.

This is my first question so I don't know what else I should add, so let me know what other context you need and I'll add what I can.

EDIT: Below I've added the debugging info Ben Johnson requested. Console output returns over 1000 values due to being called in Update(); the section shown is specifically when I go from pressing right and up to right and down.

Gravity value for input manager is the only thing I can see that's different, but changing it doesn't seem to fix my problem. I thought that obviously having the vertical axis set to the Y-axis would be obvious too, but that also didn't help so I reverted to the one above it. 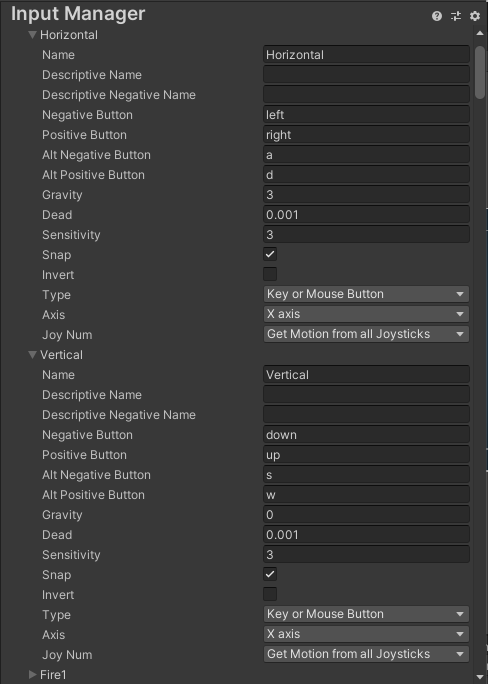 Browse other questions tagged unity input axis or ask your own question.

0
How can you have the Input Manager Axis values snap to 1 (or -1)?
0
Remove delay when changing axis input in the Unity Input Manager
0
Unity C# Input Buffering
1
How to completely stop the camera from clipping into the ground
0
Object jumping when it shouldn't - Input.GetAxis and booelans used - no raycasting - Unity
0
(Unity) Values set in Start() will be reset?
0
How to assign separate controller axes to Player1, Player2?
0
Unreal MouseWheelAxis negative axis does not work
1
Unity Input: Thumbstick works in editor, not in WebGL