unity and maya - how to export/import fbx animation with rootmotion and non-rootmotion clips?

I've started learning about and playing around with animations in Unity and I've installed the Basic Motions Pack by Kevin Iglesias. I wanted to know how they work and to see if I can modify them so I've looked at the animation files which are .fbx. The animation hierarchy in Unity looks like this

where BasicMotions@Walk01 is the in-place animation and [RootMotion] is the root motion variant which has velocity. I've looked into what root motions are and I think I've grasped what they are, but here's where things have gotten interesting.

I've imported the BasicMotions@Walk01.fbx into Maya and it looks like this

it has a root joint for root motion and the animation moves the rig in each keyframe. So far so good! I've modified the animation so that it plays in reverse, basically made a sketchy reverse walk animation. Exported it to .fbx with the following parameters 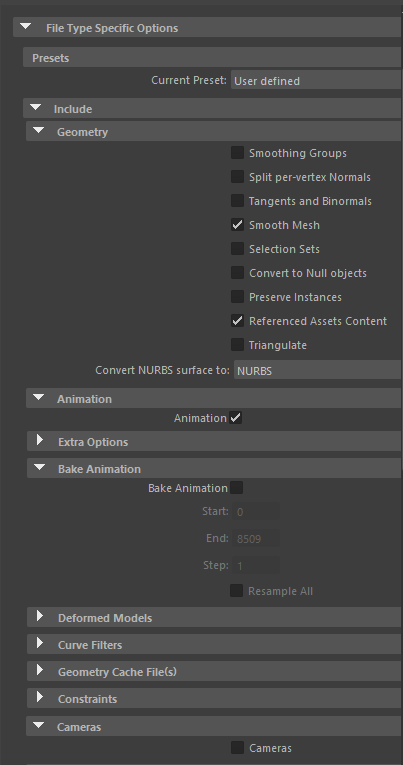 And then opened that in Unity, however when I import the animation and rig it it only has one clip and it's the Root motion clip, and I can't get the non-rootmotion clip. The Root Transform Position (XZ) Loop match is always red and if I don't bake it into pose the animation functions like the Kevin's RootMotion animations, but I don't know how to get the non-RootMotion clip. What am I doing wrong here?

4
How to import character from Blender to Unity?
1
Multiple FBX Animation Files in Maya
1
Maya keyframe animation to unity
0
Unity: Animation With Motion Now running in place
0
Convert the animation inside FBX into Unity
1
How to set default pose of model from Blender? (Exported as FBX)
0
Import .fbx animation from Maya 2012 to Unity 2018
1
How to disable animation root motion