I am quite new to game development, and I am trying to create a top-down game with 2D sprites, but with a 3D feel to it. I managed to do so with the 2D engine by setting Transparency Sort Mode to Custom Axis with the axis values set to (X=0,Y=1,Z=0). I then moved the pivot of GameObjects to bottom-center and used the pivot as sorting point for the sprites. I am now trying to create the environment, but my character 'clips' against the Box Colliders, even though I did all I could think of to align them (same pivot coordinates, same collider offset and size). See the attached GIF for an example:

Can anyone give me advice on this issue, or point me towards resources that might be useful?

Some pictures of the settings I used: 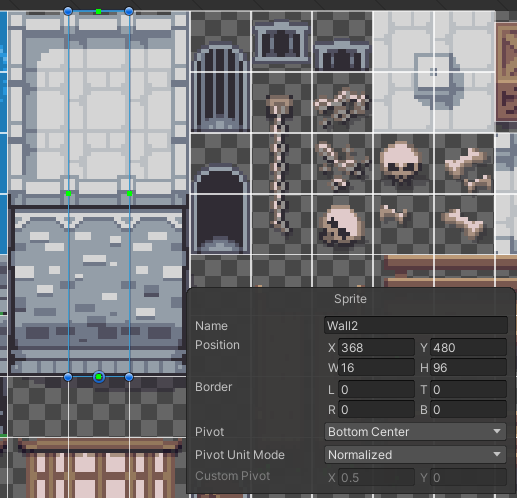 DMGregory asked me some other good questions in the comments that made me think about my problem. Based on that, I was able to solve the problem myself. In the end, I solved it by using the proposed CompositeCollider2D, and by toggling Grid Snapping on.

I then aligned the objects while snapping to the grid, and this seems to have resolved the 'clipping'.

However, the clipping now occured at the edge of the wall. In addition, I had to set the BoxCollider2D on the Player, to a CapsuleCollider2D.

Not the answer you're looking for? Browse other questions tagged unity 2d collision-detection collider or ask your own question.

8
When would a mesh collider be better than primitive colliders
1
How to find the closest point on multiple colliders within a box?
0
How to know which child collider triggered in parent?
0
Unity Collider2D is causing the game object to disappear upon collision
0
Colliders slightly intersecting each other; any solution?
0
How to detect intersections with only colliders and not use the physics engine?
1
How can I jump down from a platform in Unity?
1
Is it possible to somehow change the collider points to match sprites during the animation in Unity?