The sweeping method for detecting and resolving collision has proven to be very versatile to implement collision for our game, and I have this GameDev.net article to thank for that: https://www.gamedev.net/tutorials/programming/general-and-gameplay-programming/swept-aabb-collision-detection-and-response-r3084/

The article was very helpful and I learned a lot from it. It did have some bugs in its example code (thankfully we don't have them ourselves), but the concept was the important part. I suggest you read it since it's a very important reference for this post.

The problem I am presented is an unwanted, yet expected behavior. Basically the player is unable to fall into tile-sized gaps if the player is also tile-sized (unless there is something at the end of the hole to block the player).

While the code works in accordance to the GameDev article (I have a demo further down this post), there is a subtle issue with the method of "sliding".

Sliding is a method of collision resolution so that the entity does not stick to the surface of the other physics bodies. It basically allows the player to walk on the ground and slide along walls when jumping on them without being stuck on the surface. This image from the article describes it better than I do: 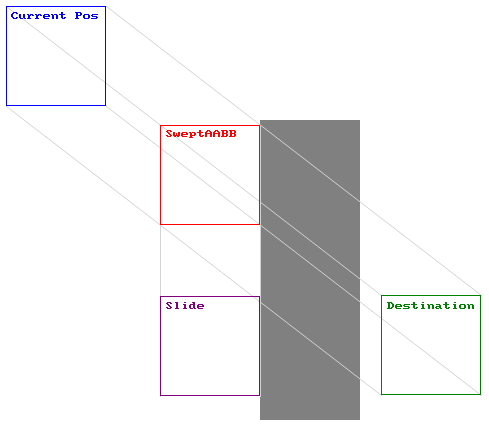 This is an ideal solution, but restricts the tile-sized player from falling into tile-sized holes and instead allows the player walk over it.

As you can see, you would expect the player to fall into those holes, but Lo and behold he walks right past them! I have tested with various walking velocities, even lower than one pixel per frame and the player still walks past them.

In addition, I'd like to clarify that this is not a problem with just one axis, since the player can't jump into tile-sized holes either.

Note that the player is still capable of falling into those holes, there just needs to be a blockade to allow it.

...and the same goes for walking into one.

The Root of The Problem

I suggest you read some of the code in the demo I have provided, since the following code snipped is relevant for this section:

I presume this is a problem caused by the collision normal calculated for the sliding effect. Assume the player walks towards a tile-sized hole from the left (the hole is now to the right of the player). My collision resolution algorithm takes into account other potential collisions based on the sliding vector applied to the player upon the closest detected collision. This means the tile before the hole is what collides with the player first, which in turn applies a movement vector (the slide) with a y-component of zero. This makes the collision algorithm ignore the tile to the left of the hole as a potential collision since according to the logic, the player does not collide with its left side. 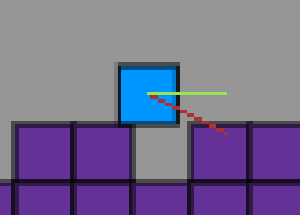 The green line is the normal vector used for sliding (which is used in the next collision calculation) while the red one is the actual velocity applied to the player before resolving collision...

The issue is I don't know how to solve this problem without breaking the code. I know this problem can be solved by simply reducing the player size. That is not something I'm willing to accept as a solution since it limits many gameplay mechanics which I won't get into here.

Here is the link to a JSFiddle I made where all the magic happens: https://jsfiddle.net/uwg0m9zp/

I've written it in JavaScript in a single HTML file where I use the p5.js library for simplifying input, graphics and vector calculation. Most of the p5.js function calls are not important for this problem, except for the vector mathematics, but if the structure of the code confuses you just look up the documentation (or ask in the comments): https://p5js.org/

This demo features a blue rectangle who is our player. He can walk, fly and have collision with the purple tiles in the map.

Use these controls to walk/fly into the tile gaps

I hope I explained my problem well. Please do not hesitate to ask questions if I came across a bit confusing. Note that I have also tested to see if this is a float imprecision problem (using epsilon, etc.) and had no luck.

Thanks for reading this and for any help in advance!

Since you have a tiled world and an exactly tile-sized character, a first step to sort out this problem can be to recognize when the character aligns with a tile. In the falling-into-a-hole case, this occurs when

Jumping is the same with the coordinates reversed.

When you recognize that your collision calculation has happened upon a tile-alignment, break the movement into two parts:

Now, you can pretend you're doing a physics step that starts at the dotted box position in this diagram, handle the situation however you like, and if the answer is not "fall down the hole" (for example, in the case where there isn't a hole!), continue to apply the second part of the motion (solid framed box in the diagram) to preserve velocity.

The second part of the problem is interesting: how do we decide the character should fall down the hole? If we look at the moment it's aligned with the tile, it could go right or it could go down, and its velocity vector is mostly aligned with going right with a infinitesimal contribution of gravity pointing down (infinitesimal because it's been in freefall for zero time; or perhaps in simulation, one frame's worth of velocity). Similarly, in the jumping case, the velocity is upward and there's a sideways force but no sideways velocity. A resolution based on the alignment of the velocity vector will consistently give the answer you don't want!

So, for the gameplay you want, you should detect the case where all of these conditions are met:

and always choose to take the perpendicular path! You can implement this by proceeding as if there was a blocking tile that stops the character moving the regular direction (might be tricky in the jumping case), or you could simplify the implementation and yet add flair by giving the character an extra kick into the hole (one frame of position shift + some velocity in that direction), maybe even with a special animation. 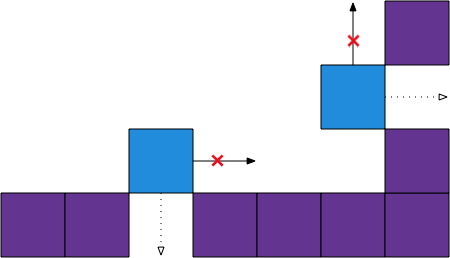 After countless hours of finding the problem through trial and error and asking around on Discord servers and, of course, here, my friend and I found a very versatile solution for a particularly irritating problem.

Credit is due to Kevin Reid who took his precious time to answer this post. He made a well written answer that explained a crucial concept within this solution. I also want to thank a fellow I talked to on the SFML Discord server who was very helpful to show us how we should approach this problem.

What did we learn?

There is one simple thing that I was afraid of which, funny enough, solved it all: adding a special case.

This solution takes into account not only holes of equal size to a tile, but pretty much any size of any entity that is about to walk into one.

Detecting such a case

I will explain the detection with a simple example that can be applied to movement in any axis. Assume the player walks from left to right and is approaching a hole that is of equal horizontal size to him in this particular frame. The broadphase portion of the algorithm will always detect potential collision with the two following tiles:

This is useful information since the collision resolution portion of the algorithm resolves collision in the order of the closest tile to the player.

By the way, I call this function in the collision resolution portion in my new demo (further down this answer)

Now what we need to do is check if these tiles are actually under the player in the first place! This can be done by checking if both of these tiles are half a vertical player size plus half a tile size away from the player on the y-axis. This diagram illustrates this best 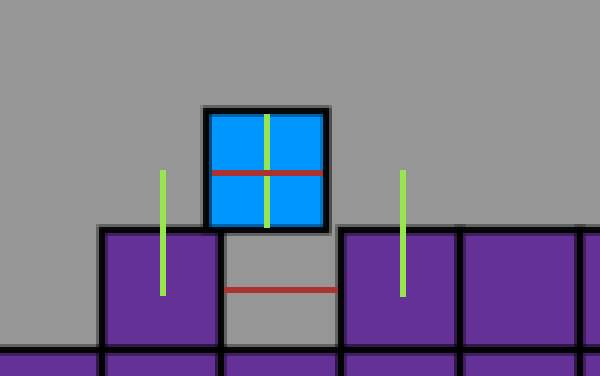 The green lines are what represents the distance I was talking about. All of those green lines need to be equal to determine if these tiles are exactly beneath the player on the y-axis.

You may have noticed a red line too! This will be used to determine if there is even a player-sized hole at all. Simply make sure the x-distance between the two tiles are the exact same as the player's horizontal size. And bingo! Now we know if there is a hole.

Resolving the case was surprisingly less complicated than the detection. Simply stop the player so that it can perfectly fit into the hole, stop all x-movement and slide it downwards with the same magnitude as the gravity. Stopping the player can be simulated with a "barrier" that is right on top of the tile next to the hole. 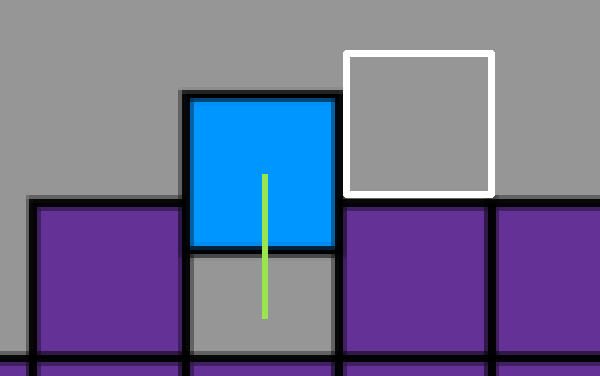 The green line is now the player's new movement vector and the white box is the simulated barrier which stops the player in its tracks! Here is the part of the code which solves that:

Here is the new link to a JSFiddle with the new code: https://jsfiddle.net/2bnv510x/

There are some new additions to the previous one. First of all, you can pass in to tile-sized holes (obviously) and secondly I've added two large entities a tile-size apart from each other. I also added some new controls that let you change your velocity:

I would like to thank everyone who helped us with this problem. We learned a lot from this problem, and I hope anyone reading this does too.

What got me posting in the first place was the lack of information on swept AABB collision detection and barely information on this problem at all. So I want this post to help anyone who struggles with the same problem.