Reacting to button holds of different durations for an anxiety game

I am working on an interactive game to aid with anxiety management.

In one of the gameplay options, the player has to press buttons for a certain amount of time. Only after the required time has elapsed (with the player holding the buttons down), will the avatar move. So for example, the instruction will be "Press the buttons for 20 seconds to move the player". This part is working.

As this is an anxiety game, however, I want to incorporate some breathing activity/instruction into the gameplay. I have chosen to use the 4-7-8 second rule, whereby the player breathes in for 4 seconds, holds their breath for 7 seconds and exhales for 8 seconds. I have no idea how to incorporate something like this into my existing game. I understand that a second timer would be needed, but how would that be able to discern between the 4 seconds, 7 seconds and 8 seconds?

Attached is my timer script:

It looks like you're also reading your input from a specialized device of some kind. I'll show a conventional version with Unity's built-in input first, for simplicity, then mention how we can incorporate your custom input.

First we can set up a data structure you can use to associate a particular hold duration with a specific action:

This gives you a nice little inspector where you can wire up a function to call when the player releases the button after this hold.

I gave it a float argument so you can pass the signed error value: if the player released half a second too early, we still call the function, but with -0.5f as the argument. 0.0f means they hit the target exactly, and greater than zero means they released late.

You can use this to give different effects and feedback for early/late releases - just be sure to give some tolerance for the limited update rate. eg. if (Mathf.Abs(errorSeconds) <= 2.0f/30.0f) will check if they were within about 2 frames of the target time.

Then we can make a script that takes an array of these hold actions, and steps through them in a sequence, 4-7-8-4-7-8... each time the player completes one hold, it advances to the next target duration automatically.

Here's what this can look like when all set up. I made a little Breathe script with a bunch of methods like public void Inhale(float error) { } to demonstrate how the events can be wired up. 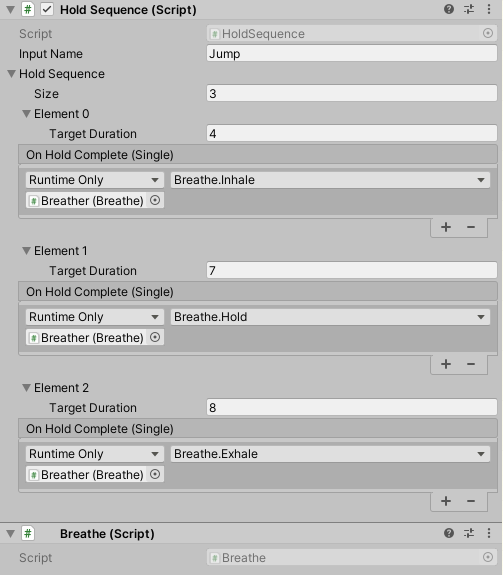 To make this work with your custom input device, all you need to do is make a component that has a similar interface as the built-in Input system. Specifically, for this script we need to be able to read two different booleans: one that's true on the frame the button has been released, and one that's true as long as the button is pressed/down/held.

With that in place, you can add a reference to your custom input monitoring script, like

Not the answer you're looking for? Browse other questions tagged unity c# game-mechanics timer or ask your own question.

5
C# Timers for game development
2
Building different game objects (EG Spells, Items,) for an rpg game
0
Can't consistently add to TimeSpan for Unity Game
1
example for creating button programmatically
1
Is Time.deltaTime different on various devices?
0
Start timer when button pressed (what is wrong with my code?)
1
How to completely stop the camera from clipping into the ground
1
Inflating a balloon while the user touches & holds the screen
0
Flipped vertical button element on Canvas not reacting