How to make balls (water, or fluid) through pipe

I'm working on a project and get stuck for days. I want to make balls going through the pipe like this game: 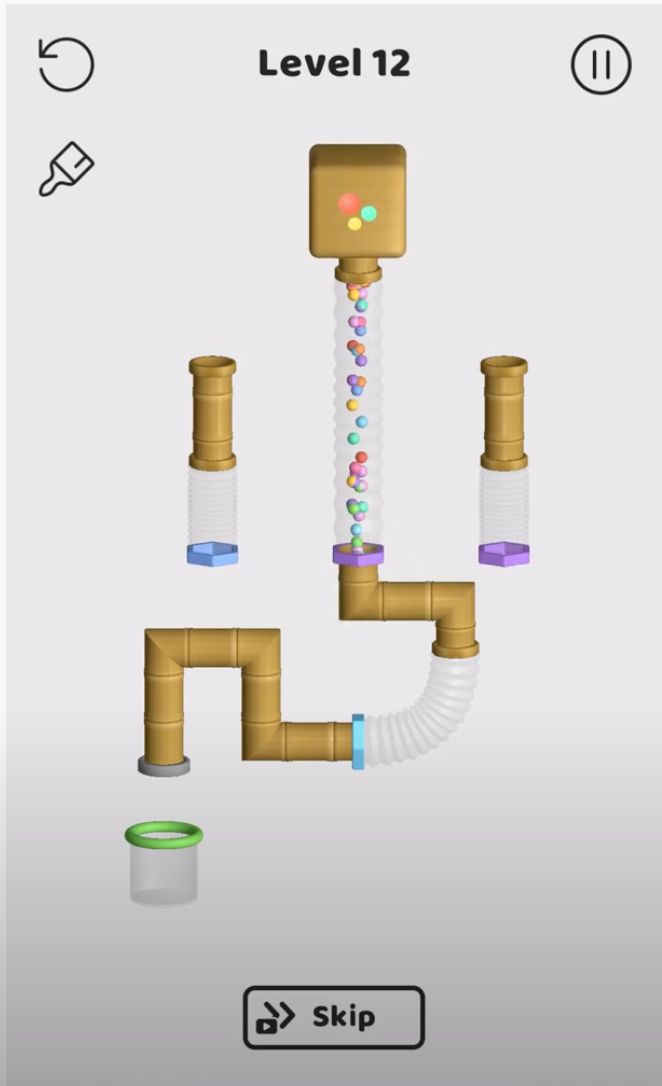 You can watch this Youtube video for more detail.

How can i replicate this game machenis?

So there are going to be various steps to this. I'm not going to write all the code, because any solutions will be moderately complex and certainly more than we can go into here, but I am going to give you the basic building blocks.

You need to get this working before addressing curved paths.

Create a linear graph where each node is the edge of a section of pipe. That is, for n pipes, there will be n+1 edges. This graph can be as simple as a List<Vector2> in C#.

Hardcode some positions in, and change them later as you like:

First we need to get the difference vector between the two points:

...So that is the full distance between these two points. The ball is 0.25 or 1/4 of the way along this difference vector, from point [0] (because [0] is the starting point):

We now have the ball at the current t. All we need to do is change t at each update:

You will know you have reached the end of a section when t > 1.0 (let's say 1.04 for sake of example). You now need to take that remainder and use it to move the ball through the next section of pipe:

I would suggest seeking a C# Bezier curve library to make this easier for you. You will need to do a similar thing with t and input this into the curve's parametric function, however: (Bezier) curves are by nature non-linear, so for a naive Bezier curve function, t=0.25 will not show the ball at 1/4 of the way along the curved section of pipe.

Rather use a library whose curve function takes in the bezier curve control points and t, and returns a linear position along the curve that approximates t - so the library will do the work to get as close to 1/4 of the way along the curve as possible, when you input t=0.25, for example.

This is optional, but I've included it as it is shown in the game you linked.

You will need to understand the basics of graphs_ and how they are constructed in code (usually just Nodes with references to other Nodes which they connect to). You will have to then forego your nice easy List<Vector2> above in favour of these Nodes.

Not the answer you're looking for? Browse other questions tagged unity game-mechanics water fluid-dynamics or ask your own question.

1
How to make a Realtime 3D Eulerian Fluid Simulation like "From Dust" in C#/Unity3D?
0
How Would I Design Realistic Fluid Handling?
108
How can I create a "see behind walls" effect?
68
How can I replicate Quantum Break's distortion particle effect?
3
How to check if a pipe placed on a fixed grid size is connected correctly to a neighbor pipe?
0
How to make extendable Mario warp pipe in Unity?
0
How to animate fluid filling down a pipe of any shape?
5
How can I achieve simulated fluid surface deformation in a bottle?