Efficient way to implement a lot of singletons

I just came upon programming patterns and learned about singleton. I'm in the process of creating my first game and it contains several managers: 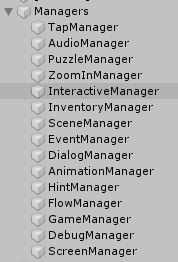 I wanted to implement singleton on each of the managers,but the only way I can think is copy pasting the singleton pattern on each awake method script attached to each manager.

Is there a more efficient way to do it rather than pasting the pattern on each awake method?

An effective way to achieve this is to not do it.

You can create a single singleton that will be the entry point and owner of all the other managers. This way, you don't need to add the singleton infrastructure to all of your managers, just to one.

I have to say this question doesn't demonstrate much research. If you plug "unity singleton" into a search engine, the very first result is the Unify Community Wiki where they show how to make a reusable Singleton via the Curiously Recurring Template Pattern.

Here's a simplified version closer to the Awake style you're describing:

You can then apply this singleton behaviour to any MonoBehaviour type by deriving from the template:

That said, as Vaillancourt points out, you can skip having many singletons by just having one overall manager that holds references to the others. In this way it behaves like a version of the Service Locator pattern, giving you a common place to re-hook the references if you ever need to change the sub-managers or have more than one:

This can help you avoid a common problem we run into with Singletons, where we add multiplayer and suddenly all the systems that used to be globally unique for the only player, now need multiple instances, one for each player. The "manager of managers" gives you a convenient place to parcel out which references to use for each player, and you can look them up with something like GameManager.Instance.GetInventoryForPlayer(2).

69
In Unity, how do I correctly implement the singleton pattern?
2
In Unity, what's a better solution than having a bunch of singleton static managers? (SceneManager, UIManager, SfxManager, PfxManager)

11
Efficient Method of Rendering Massive Terrain in XNA
2
Are prefabs the only way to dynamically build a world in Unity?
1
Inherited property in derived class reference only base class
0
Unity Singleton accross multiple scenes
0
Editing attached component property in Unity (C#)
5
Understanding Entity Component System
1
Problem with Factory Method Pattern when I try to create a Weapon:MonoBehaviour
2
Unity Tilemaps Best practices
0
How do I create a perfectly set up FBX file by script?