Understanding use of dot product in speed boost pad

I am trying to understand the dot product. I have found a website that gives you intuition about this topic and one of the examples involves a speed boost pad: 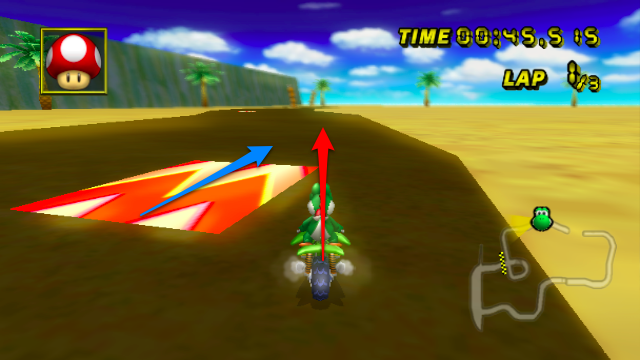 How much boost will you get? For the analogy, imagine the pad multiplies your speed:

But, if we have some overlap, our x-speed will get an x-boost, and our y-speed gets a y-boost:

I have calculated the dot product obtaining a value of 30. My questions are:

Also, I imagine that the new value for the vector would be just for the frame where it hits the pad, thus to make use of the boost a timer should be added before the speed comes back to normal.

They don't explicitly state that the boost factor should be clamped so it doesn't drop below zero, but I'd recommend this to avoid getting a boost backward if you drive across the pad the other way (unless you want a bi-directional race of some kind).

Note that since we normalized the pad's vector to a unit vector direction first, we've taken its length out of the dot product equation, leaving \$\text{boostFactor} = \| \text{car.velocity} \| \cos(\theta)\$

So then when we multiply this scalar by the original boost vector, we re-introduce that vector's length, getting a total velocity change with magnitude:

Doing it this way, the velocity change is always pointing in the direction of the pad, so if you drive across it at a diagonal, you'll get a nudge to redirect you forward according to the pad's direction, helping you stay on-track even if you veered sideways quickly to catch the boost pad. (I chose to show this style because anecdotally, that's the behaviour I'm used to seeing in racing games - though it's been a whiles since I played this particular Mario Kart so I don't recall whether that's how they do it)

You could instead choose to normalize the velocity, not the boost vector, and multiply the velocity by the boost factor to get the velocity change. That would give you a boost pad that sill gives you the same magnitude of extra velocity, but preserves your incoming direction: drive across the pad diagonally, and you'll be accelerated diagonally.

Note that this is a good example for showing the kind of thing we might use dot products for, but it's likely not exactly how Mario Kart or other racers implement their boosts. A few considerations we'd often apply when fleshing this out to a real game feature:

So take this example for what it is: a way to illustrate a situation where dot products are useful, but not as a prescription for how boost pads must be implemented. Like any game mechanic, there are lots of different ways we can choose to implement it to get different effects.

Not the answer you're looking for? Browse other questions tagged vector game-mechanics linear-algebra racing vehicle .

2
Dot Product Vs Cross Product Turning a Turret Towards A Enemy and firing
19
How do I use the dot product to get an angle between two vectors?
2
Gerstner wave function simplified?
5
What is a direction vector and why should it be normalized?
0
Getting vector relative to other vector in rotating object
3
Why does a unit vector show direction?
0
Why does XMVector4Dot return a vector with the dot product copied to it's components?
0
How to calculate the dot product between the input direction and a character with root motion?