I'm attempting to copy/modify the MultiplayerShootout project's multiplayer functionality for my own project. I'm running into issues when Player 2 joins a running session though. Finding it very hard to debug multiplayer stuff because you have to run it in standalone and toggling breakpoints doesn't seem to be illustrating any issues.

The first player to search for a game hosts a game, then the OnPostLogin in the GameMode fires and calls the ClientPostLogin event in the PlayerController, then the PlayerController calls the RespawnPlayer event inside the GameMode which spawns and possesses the character. The second player finds a session and joins it, but the server is not spawning a character for them on the other PlayerStart.

The logic is very much similar to the MultiplayerShootout, but I have modified it in the following ways:

The 1v1 button searches for sessions, and if it can't find any it will automatically host a session.

The ClientPostLogin event on the PlayerController and the RespawnPlayer event on the GameMode accepts a Selected Character (Actor class) variable. This is so I can get the player to select their character before they matchmake and pass it through to the PlayerController and then GameMode for spawning purposes. Would really appreciate some help on this, been stuck on it for a while.

Here's some of the blueprint scripting to make sense of it:

OnPostLogin event in the GameMode

RespawnPlayer event in the GameMode

Moving the RespawnPlayerEvent into the PlayerController fixed this. I think it had to do with the inability for the second client who joins (who is not the server host) to call a function in the GameMode (which only exists on the server). 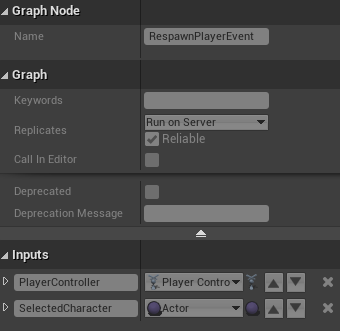 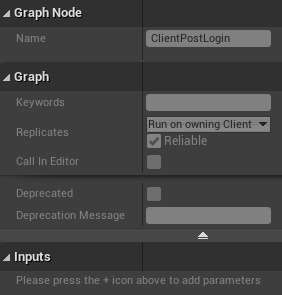 Not the answer you're looking for? Browse other questions tagged multiplayer unreal-4 blueprints online spawning or ask your own question.