I have Lifters that "carry" an object. I want the object to move and rotate based on how those Lifters move. Requirements include: 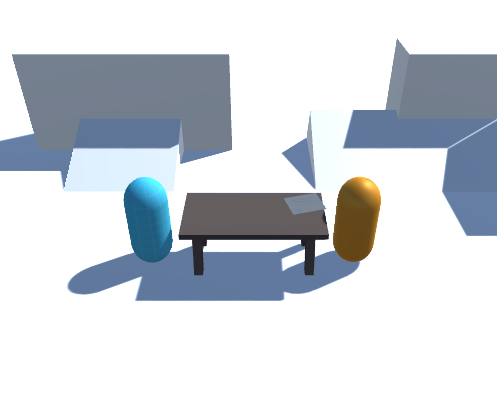 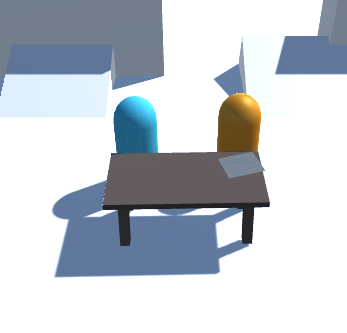 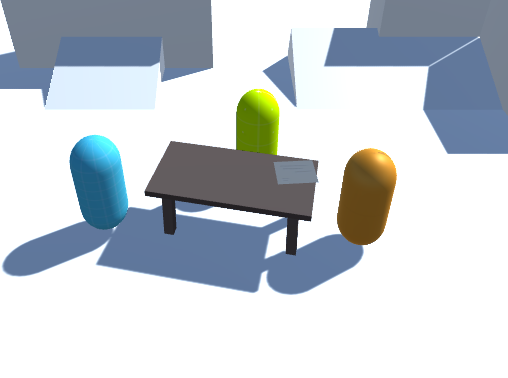 As such I implemented this by having the object move by setting its velocity to the average of the Lifters' velocity.

Now, if not all of them move (or if there's a disparity in their velocities), I want the object to rotate, like so:

This is done by keeping track of how much an individual lifter has moved in a frame from the Object's position, and calculating the angle via

This "movement angle" I add up for every Lifter and then at the end, Rotate the Object via Transform.Rotate(Vector3.up, m_Angle).

However, this approach has some problems:

Because I want this to rotate the object in "3 dimensions", I have attempted to calculate the "euler angles" of each Lifters' movement via:

And then at the end, I rotate the Object based on these "movement angles":

This works in three dimensions, however it is off in the same way that m_Angle was before I divided it. It rotates the object too far. On top of that it seems to produce rotations along axes that have no displacement.

I want the object to only rotate exactly by the angle created by the Lifter's movement. This should keep it "synced" to Blue instead of rotating past as you see here.

When I check how much rotation Blue is adding per frame, I get an output like so:

Despite moving solely on the x-axis, there is a z-euler angle being created, and the y-euler angle of 0.493 degrees is too much for -0.015f movement. I do not know why rotation.eulerAngles is inaccurate in my usage.

The only issue I can perceive is that since the Object's position is also moved at the end, the angle calculation assumes it is not moving and generates a larger angle (e.g., perhaps newDisplacement should be something like currentPos - (transform.position - m_Body.velocity * Time.deltaTime) ). However, removing the Object's movement from the finalPosition of the Lifter seemingly has no effect. Or perhaps there is some finite precision in Quaternion.FromToRotation? Or my math is incorrect in some way?

I'd love a sanity check on the code or approach or if I should approach this problem from a different perspective.

EDIT: Here's an example gif of the functionality with m_EulerAngles code (so the rotation overshoots, but works in 3D - also I recorded the gif at lower fps that's not the game's framerate)

Trying to track displacement/deltas each frame is probably making this more complicated than it needs to be.

A much simpler solution is not to use deltas, and just update current position/rotation each frame based on the lifters.

We don't care how the lifters moved since the last frame; we just care where they are currently positioned.

One of the major elements I was struggling with in my scenario was the over-rotation from the Quaternion.FromToRotation() method.

I noticed that it gave small angles even when an individual Lifter had not moved (e.g., when From rotation and To rotation were identical). I had focused so much on the moving Lifter I did not notice the non-moving Lifter was adding rotation when it should not have been.

I limited angle calculation and addition to only when an individual Lifter moves and suddenly the rotation is perfectly accurate, and furthermore did not need the questionable division of Lifters count from the vector method.

Not the answer you're looking for? Browse other questions tagged unity c# physics rotation quaternion or ask your own question.

7
How do I correctly use dual quaternions for rotation and translation of an object?
2
“Align” a rotation to a direction
15
How to rotate an object around world aligned axes?
1
How can I support the clamping of quaternion-based rotations?
12
Rotate object around fixed axis
0
Smooth Rotate Object While Orbiting
0
Using Euler angles to rotate object 360 degrees