I'm making an infinite runner game in Unity 3D. I have it so that platforms spawn and move backwards toward the player and they are destroyed once past the player. Over time when the platforms are spawned, the position they're spawned at gets more and more inaccurate. Sometimes they over lap slightly and sometimes there are small gaps in between them. And as the game is continuously played, it gets worse and worse. You can watch the video below to see what I mean. This is the script I use to spawn the object

Here is a video so you can see what I'm talking about: https://youtu.be/eASouQlTsqs

Also, I know the exact unit size for each platform is 11.92. I know this because I added a c# script to each one that shows me the vector3 values. There are originally 20 platforms. And to know exactly where to spawn the object I did 11.92*20 = 238.4. And the first platform is at -4.78. So I subtracted that from 238.4 and got 233.62. So a z position of 233.62 is the correct place to spawn the object. I just wanted to include that in there so you know that the spawner gameobject is in the right place. Please let me know if there is any additional information about this that I can give you. Everything should theoretically work I think, so I seriously have no idea what to do. Thanks for your help!

And that script is attached to PlatformKiller Game Object: 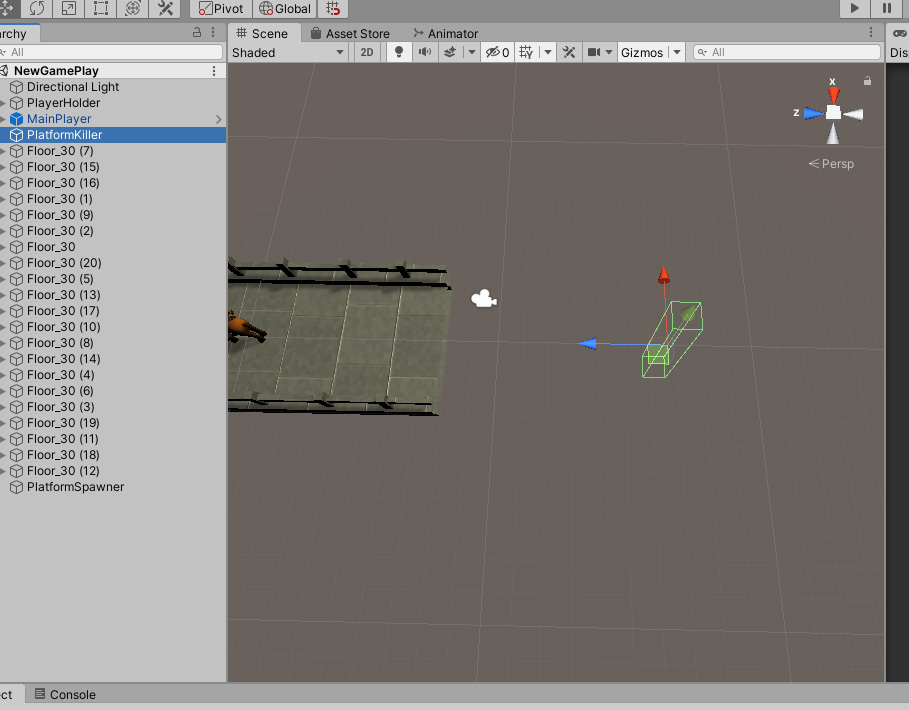 Your mistake is assuming that time in a game is continuous.

In a perfect world, if we had a sensor that fired the very instant that the first atom of a platform hit the kill box, and that triggered the new platform to be spawned at exactly that instant (or as fast as the speed of light will allow), then your platforms would match up end-to-end, no problem.

But time in games is quantized in steps. So the first frame that your kill box detects a platform touching it, might be 19 milliseconds after the contact actually happened. If we don't account for that "spare change" time between the theoretical moment of contact and the next opportunity our script ran to detect it, we'll end up with gaps.

So, instead, let's make a version of this that's based on space, not time. That should be easier to reason about:

This can still be a little off if the script runs after your platforms have already moved for the frame (because the new platform hasn't yet, so it will try to catch up and overshoot), so adjust it in the script execution order to run before the platform movement.

Not the answer you're looking for? Browse other questions tagged unity platformer spawning prefabs or ask your own question.

3
Uncontrollable platform spawning
1
Transform.forward having problems after rotation
0
Spawning random objects within certain boundaries in Unity
2
Instantiate a prefab on button press and keep it dragged
0
Unity UNET, problems spawning and then destroying that instantiated prefab
1
Issues using NetworkServer.Spawn with Unity and Mirror-Networking