How would one be able to clamp a quaternion based on the angle relative to a plane surface (defined by a normal)?

My diagram below provides more of a visual explanation of exactly what I am talking about.

The quaternions are clamped based on the angle between the planes surface, and the quaternion's forward vector (i.e. q * (0, 0, 1)). The quaternions are global quaternions. The plane normal (vector) N defines the upwards direction of the plane surface. Angles that go opposite of the normal vector is negative, whereas in the direction is positive. With that in mind, the quaternion's angle cannot be greater than MAX degrees and less than MIN degrees. These bounds are visualized by the cones (MIN is -90˚ in the diagram, so the cone is infinitely thin). 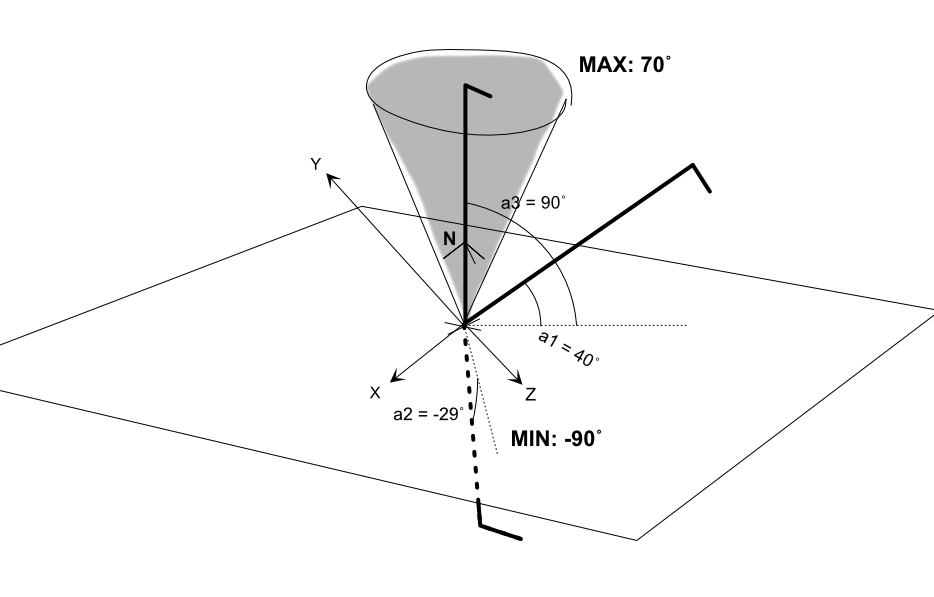 Clamping the delta could be achieved by determining the beginning and end angles, and obtaining a ratio to be used as the t value (the interpolator) of a Slerp function, so the final quaternion's angle is that of the bound. The issue I see with this is how the roll would be manipulated due to the Slerp. Would the intended, final roll of the quaternion be lost due to this Slerping?

This idea of change seems more important in the example of if the quaternion was to go from -89˚ to -91˚. The final quaternion should be snapped back to -90˚ (if the bound was -90), instead of considering the new quaternion as -89˚ but from the other side. Without this proper interpretation of the quaternion's angle, the quaternion could rotate around constantly and consistently due to the angle never being considered less than -90˚ and greater than 90˚.

Orbiting camera with user or author definable pitch angle clamping, and a varying change in "up". Example of varying change of "up": Mario Kart 8 Deluxe.

One idea is that you transform to a coordinate system where up is actually Vector3.up then do whatever clamping you need via standard Euler angles, and then transform it back.

So I think something like this (this is the version in Unity C#, but take it as pseudocode) would work:

targetNormal here needs to be normalized.

Not 100% sure if I worked out my trig correctly since I don't have a way to test this (most likely error is that I got the sign of xyz wrong), but the general concept can work like this.

Not the answer you're looking for? Browse other questions tagged mathematics rotation quaternion .

15
GLM: Euler Angles to Quaternion
8
Routes on a sphere surface - Find geodesic?
0
Rotation in 3D space using Quaternion
1
How can I min-max quaternions?
0
Wierd behaviour upon limiting rotation on Y-axis
3
Rotate quaternion around plane normal
1
Limit rotation/direction of two axes with seperate values (Vector3)
0
Rotating only 2 axes of rotation quaternion to "point" in a direction
1
How to rotate a 3D object based on stick Input and the normal of the ground's surface? (Unity3D)