I've got a 3ds max model and I'm trying to rig it. I followed some tutorials, but I got stuck. I've got my rotating head, and the arm that holds it and pivots up and down, but the two don't "connect" well.

Here's my rigging set up:

The leftmost dummy should move up and down and control the height of the miner head (the jagged-edge wheel) and the arm that holds it.

But, when I move my dummy up vertically to test, the arm works perfectly, but the miner head ... uh, doesn't. This is from the same angle as the first shot and you can see that the miner head tilts, instead of moving straight up and down. 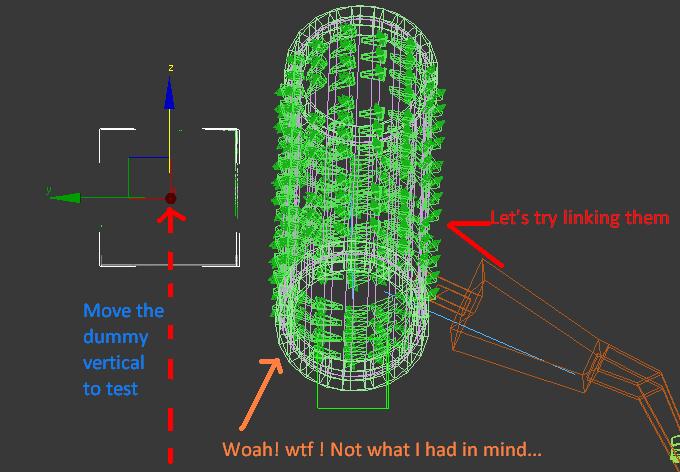 I tried playing with the miner head's pivot points, but they seemed perfectly centered. Is there a way to make my miner head only go straight up and down (that will still work with my rotation constraint? ) instead of doing this strange sideways tilting motion? Maybe that's not the right thing to do, I could really use some hints in where to go from here to fix this strange tilting motion..

So, the solution involved going back a few steps, before any constraints were added.

First, the miner head wasn't rotating correctly, but fixing the pivot point before doing anything else - especially constraints, helped a lot.

Next, we want a look at constraint from the arm to the up-down-dummy, just as it was before. We also want the same constraint on the head, only, with much less influence, so when it moves up and down, it appears to stay on it's arm.

Finally, the rotation constraint on the head, as it was before.

So, the problem was : 1- pivot point wrong, 2- used the wrong constraints

1
Having trouble with grouping in 3D Studio Max
6
XNA: Rotating Bones
8
How can I convert a model's rigging from standard bones to a biped in 3DS Max?
2
Guidelines when rigging a character
0
Maya Rigging - Shoulder joint attached to head?
1
Unity 2D rigging parts order
0
Can I add rigging bones to a model imported from Blender inside Unity?