How do I restart an animation that is already playing using SetTrigger?

I have set up a relatively simple example scene with one enemy.

The enemy plays an idle animation, and when my hero character shoots him, I set the trigger "Hit" via script like this:

This causes the animation controller to react to it, and it transitions from "Idle Animation" to "Hit Animation":

The hit animation is 3 seconds long. After it has completed, the animation controller will automatically transition back to the "Idle Animation".

I would like make it so that the hero character can shoot the enemy even though he is already playing the hit animation. Let's imagine you use a machine gun to shoot him repeatedly quickly.

However, when I call

while the hit animation is already being played, nothing happens.

As I currently understand it, this makes perfect sense as the Trigger triggers the transition from animation A to animation B, and if we're already at animation B, then there can be no transition.

What could I do to "restart" the hit animation?

According to DMGregory's suggestion, I have created a transition from "Any State" to "Hit Animation", and now it works. Calling "SetTrigger("Hit")) repeatedly causes a restart of the "Hit Animation".

Also, I have saved a lot of transitions because with "Any State", I can reach all of my "hit" animations (of which I have many, I just removed them for simplicity here) without creating transitions between all animations.

This is what the animation controller now looks like for me: 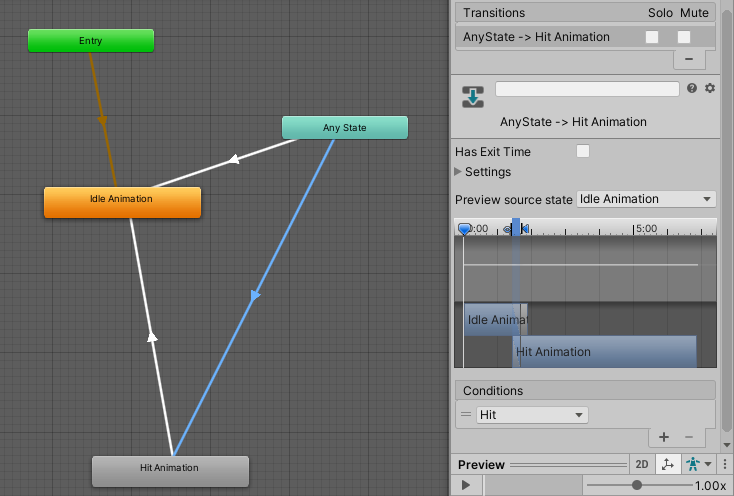 Not the answer you're looking for? Browse other questions tagged unity mecanim animation-controller or ask your own question.

0
Changing the duration of motion state transitions in Animator Controller
1
Reseting animation
0
Why is the character not walking right when creating new animator controller for the character?
0
Unity Animation isn't played once despite using trigger parameter
1
Does Animator.SetBool take precedence over Animator.SetTrigger in Unity's Animator?
0
How can I play an animation as long as the player is on the pressure pad?