How to sample from six cubemap images for a skybox in Shader Graph?

I'm trying to update a skybox shader to URP and reimplement it in Shader Graph. The shader code itself is pretty straightforward, but I don't know enough about Shader Graph yet to set up the basic skybox.

Trying to Google different variants of "unity shader graph cubemap skybox" turns up tons of noise and nothing actually useful that I can see.

Does anyone know what the basic node setup is I would need to input six images and output a skybox?

Set the "Face Size" parameter to your desired resolution before you assign your textures - it won't re-import them automatically if you increase the size later.

Assign your six textures to the six face fields. 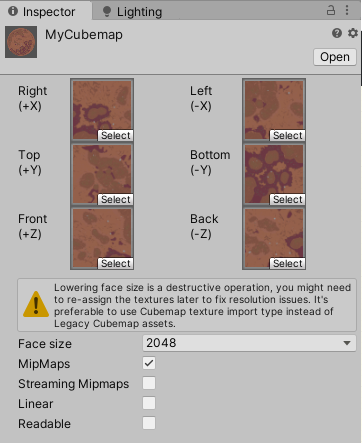 Now inside your shader graph, you can add a Cubemap property, and sample it like so:

Assign your custom-made cubemap to the material property.

Note that you can also pre-compose your six images into a single image in various layouts, and Unity will automatically convert this to a corresponding cubemap based on your import settings. This gives you additional options to filter the cubemap for use in reflections, and HDR support.

Not the answer you're looking for? Browse other questions tagged unity skybox unity-shader-graph or ask your own question.

2
How can I prevent seams when attempting to create a skybox for Unity5?
1
Unity Shader Graph, set blackboard properties from code
0
How can I blend the center color of a 2 side gradient so it isn't as harsh looking in Unity Shader Graph?
1
How can I incorporate subsurface scattering into a custom shader graph?