2D player controller moves to the left, but not to the right

I wrote a C# script to control a 2D player, but the script is not fully working. When I press the right arrow/d key to move the player is not moving in the right direction, but I have done the same exact thing for left key which works fine.The script shows no errors too.Kindly help me to solve the issue.The code is:

When I tried to print debug statements in different parts of if statements, they work fine. The problem in my observation is in :

You can make this code much simpler.

First, you can use the Input Manager to read your multiple sets of input buttons as a single axis. Mapping the typical arrow keys/WASD A=← / D=→ to a "Horizontal" axis is already handled by the default setup: 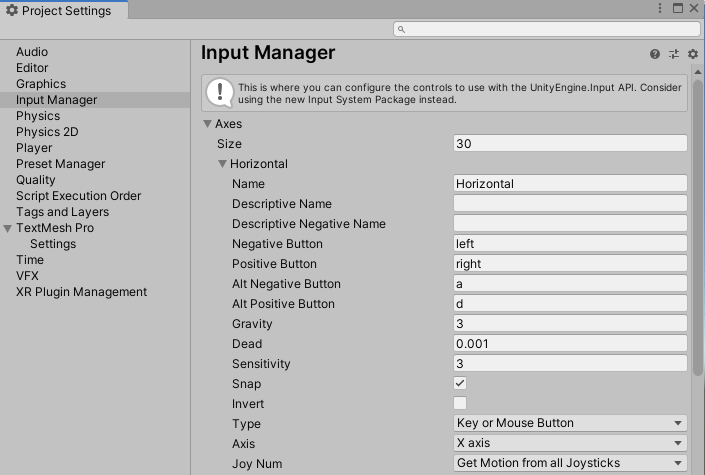 Similarly, you can edit the default "Jump" action to read both W and ↑ as a single synonymous input.

Doing it this way also allows users to remap these controls if you show the input mapping dialog at the start of your game.

With this in hand, you can simplify your code to:

Not the answer you're looking for? Browse other questions tagged unity c# 2d platformer or ask your own question.

2
Bodies are colliding but refusing to rotate in Box2D
1
How can i make fade in/out of the alpha color of a material from black to none black?
0
Problem using Event Trigger Unity to change bool , but bool keeps setting back to false
1
How to completely stop the camera from clipping into the ground
1
Struggling to smoothly implement 4-directional movement in Unity2D
0
Unity RTS Single Selection Problem
0
collision detection and normals from rigidbody