Names for specific regions on earth for global RTS

I am developing a global real-time strategy game that uses Google Maps to represent the earth. I am cutting up the globe into 32 squares with each square exactly 45 degrees latitude and longitude. The squares are also aligned to the grid starting from 0,0.

I would like to give each square a nice name that meets the following criteria (in order of priority):

I have come up with the following, but I would like to know if there is a system already out there that better meets my needs (note that I've accidentally swapped my lat/lngs - sorry!). Alternatively, if anyone has much more knowledge of geology/geography than I do, please suggest a better naming convention and names as some of the names are too long and many contain more country names than I'm happy with (I'd prefer neutral region names): 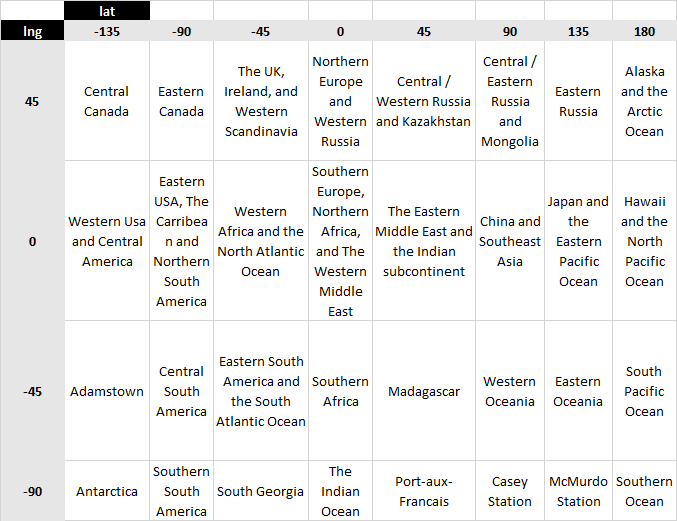 Here is a map of the world with the 45 degree grid squares shown to help you to visualise the problem: 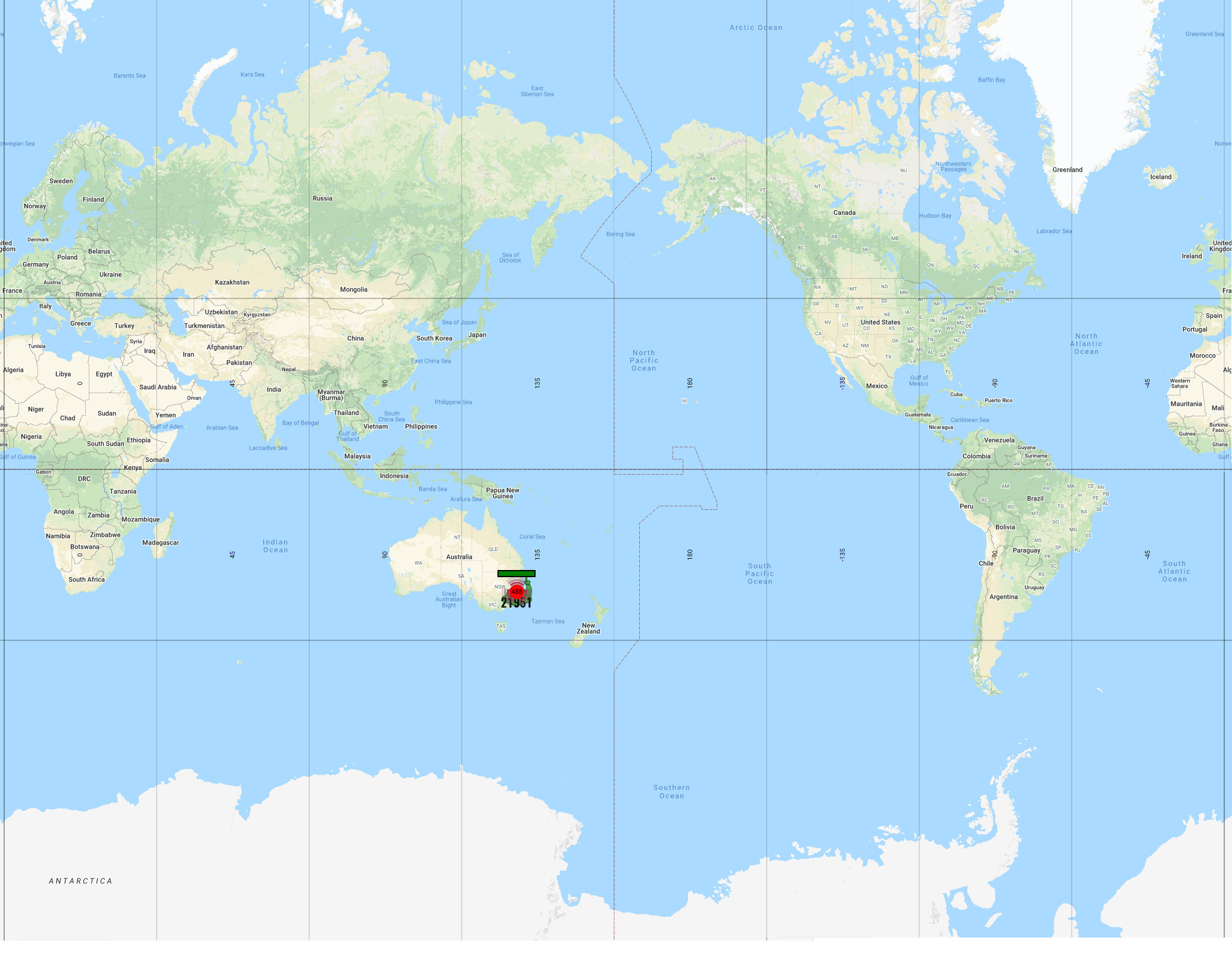 Edit: Influenced by Phillip's answer, I have revised the approach using continents and oceans to be as neutral as possible: 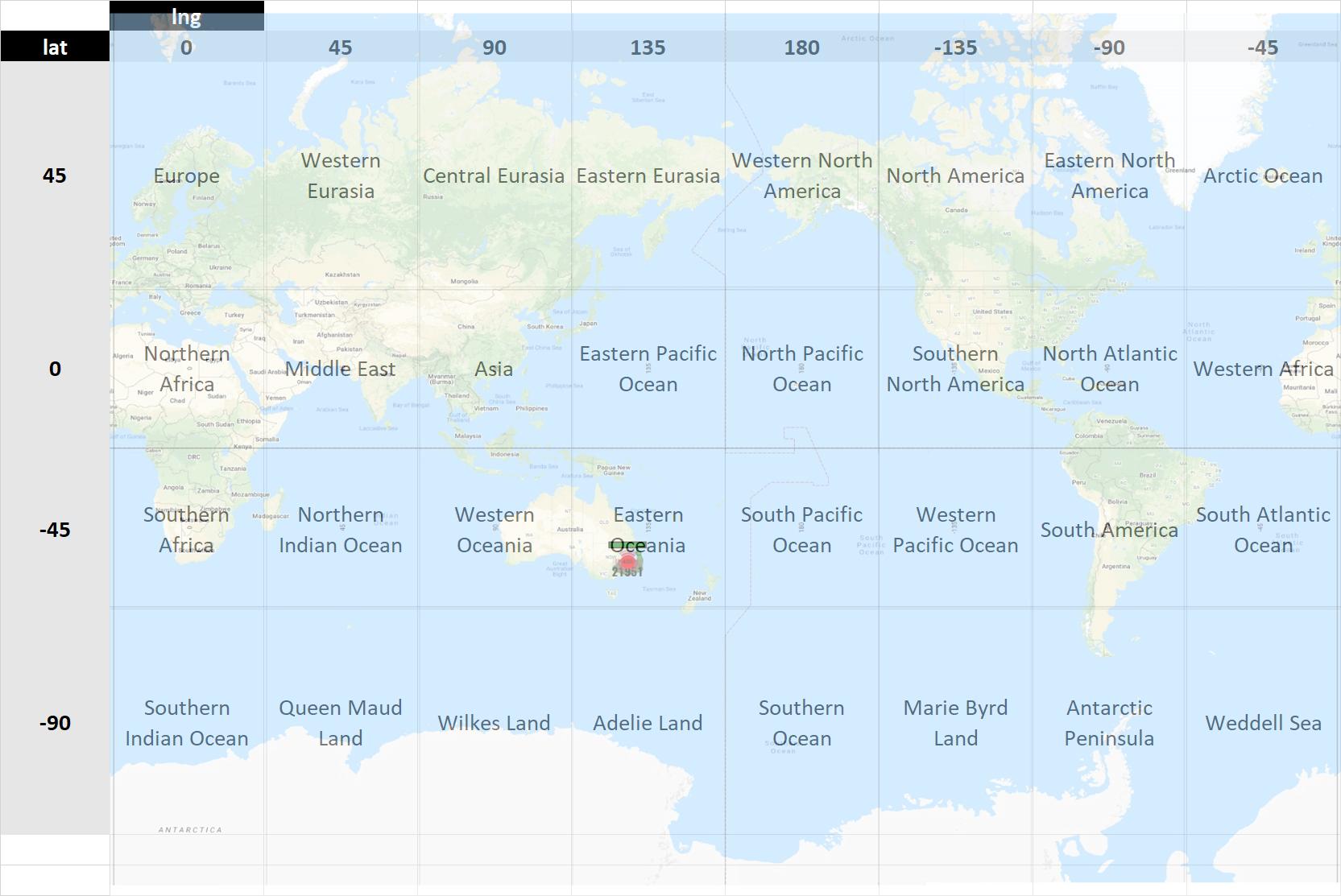 The only grid squares I'm not 100% sure about are "Middle East" (is this still PC, or is there a better term - Arabia perhaps?), and the Antarctic territories (but since no-one lives there permanently and most countries seem to dispute Antarctic ownership anyway, I think I'm less concerned about this one). Please let me know if this approach is now as appropriate and neutral as possible. 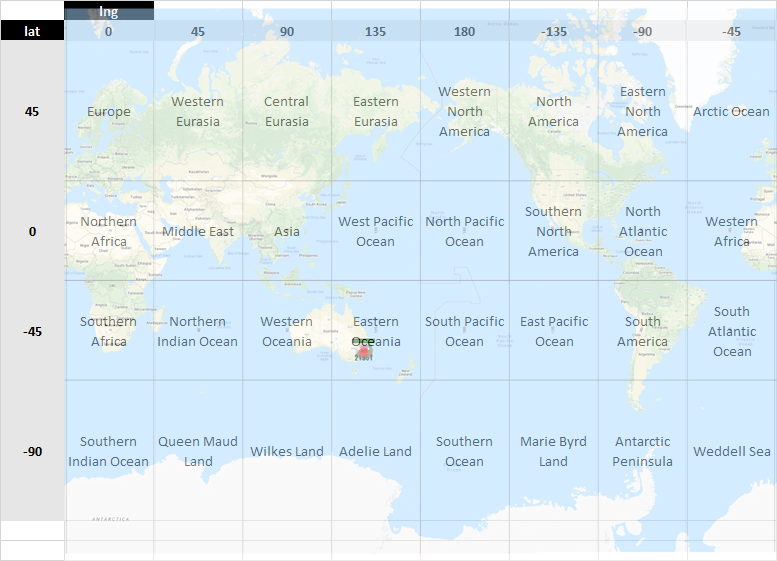 Considering that your grid borders do not respect geographical or political borders at all, whatever names you choose, they will either be too long to handle or contain inaccuracies which might potentially cause controversy. And it is pretty easy to accidentally make controversial political statements while carelessly putting names on geographical features. For example, whether you name the water between Saudi Arabia and Iran "Arabian Gulf" or "Persian Gulf" can put you on an embargo list.

So the best solution might be to just refer to them by their grid coordinates. The letter-number system used on many maps might be better for that than using latitude and longitude ("Central Canada" would be A1, "Eastern USA..." would be B2). Not that immersive, but a pretty sure-fire way to dodge any controversy (can't argue with geometry). Your community will likely make up their own unofficial nicknames for some squares, but that's none of your business (as long as it doesn't escalate into harassment).

Alternatively, you could fudge the cell borders in a way which makes them follow real-world continent borders. That way you can name them more accurately and in many cases also avoid to use the names of countries in favor of the names of continents (which usually has less potential for controversies).

We can of course not know how that would affect your desired game experience, because we know nothing about it. But my intuition would tell me that being more flexible with regards to cell boundaries would widen your design space when it comes to redefining borders in order to solve game design issues which you discover while playtesting.

This is the best I can come up with:

I have (retrospectively) applied the following rules / refined my original rules:

Not the answer you're looking for? Browse other questions tagged game-design mmorts .