I'm new to Unity and am trying to create a sort of CRT computer monitor/terminal with text. To draw the text, I set up a Text Mesh Pro with its own camera, which renders to a Render Texture. 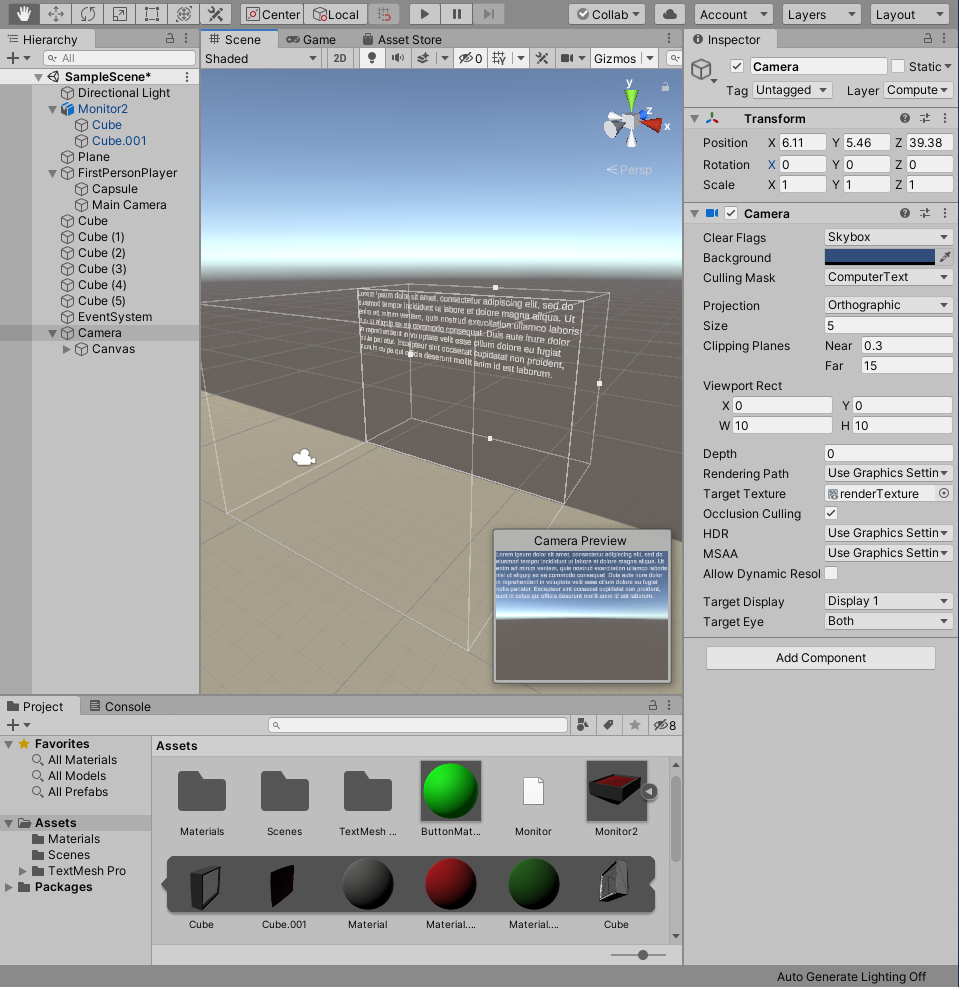 I then designed a simple computer monitor model in Blender split into two objects: one for the glass part of the screen, and another for the 'rest' of the monitor exterior case. I saved a copy of the .blend file into the Assets folder and imported this into Unity.

My blender model: (two separate objects, with the separate "screen" piece moved out of the screen) 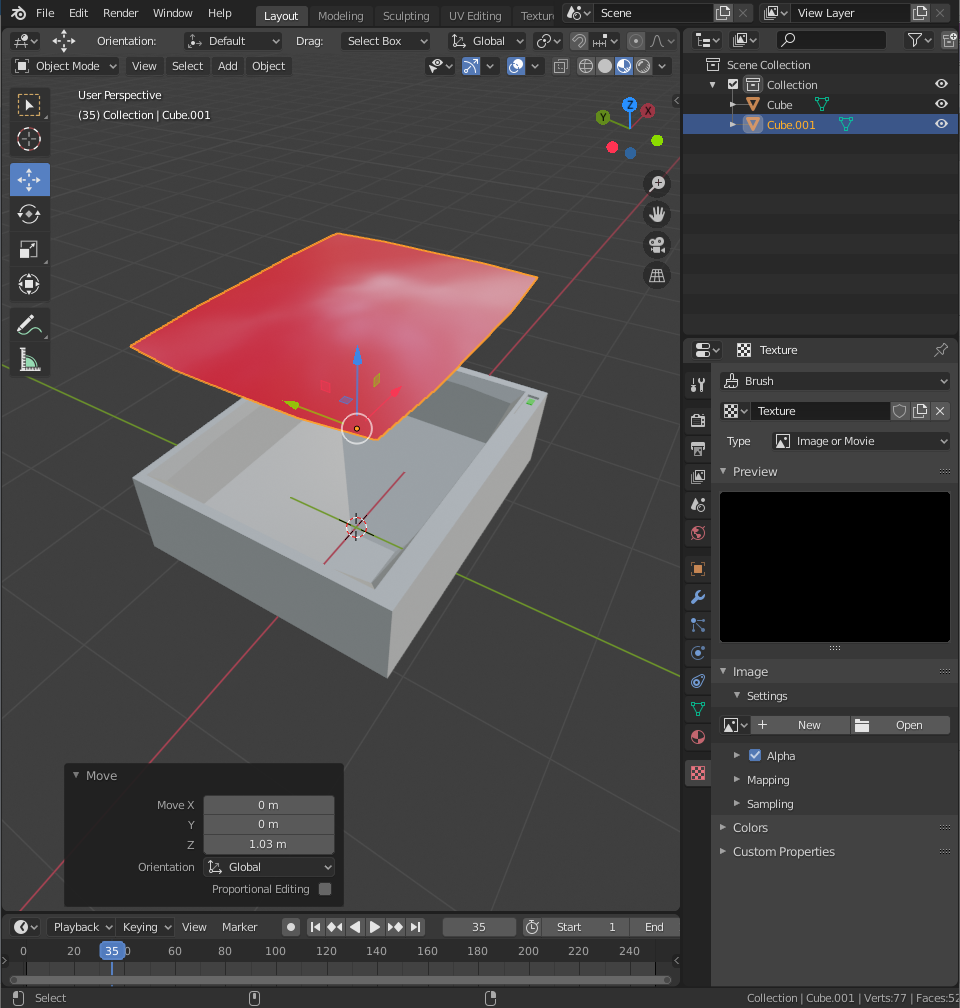 When I try to apply the Render Texture onto the screen object, the texture is rotated 90 degrees anti-clockwise and is too zoomed in: 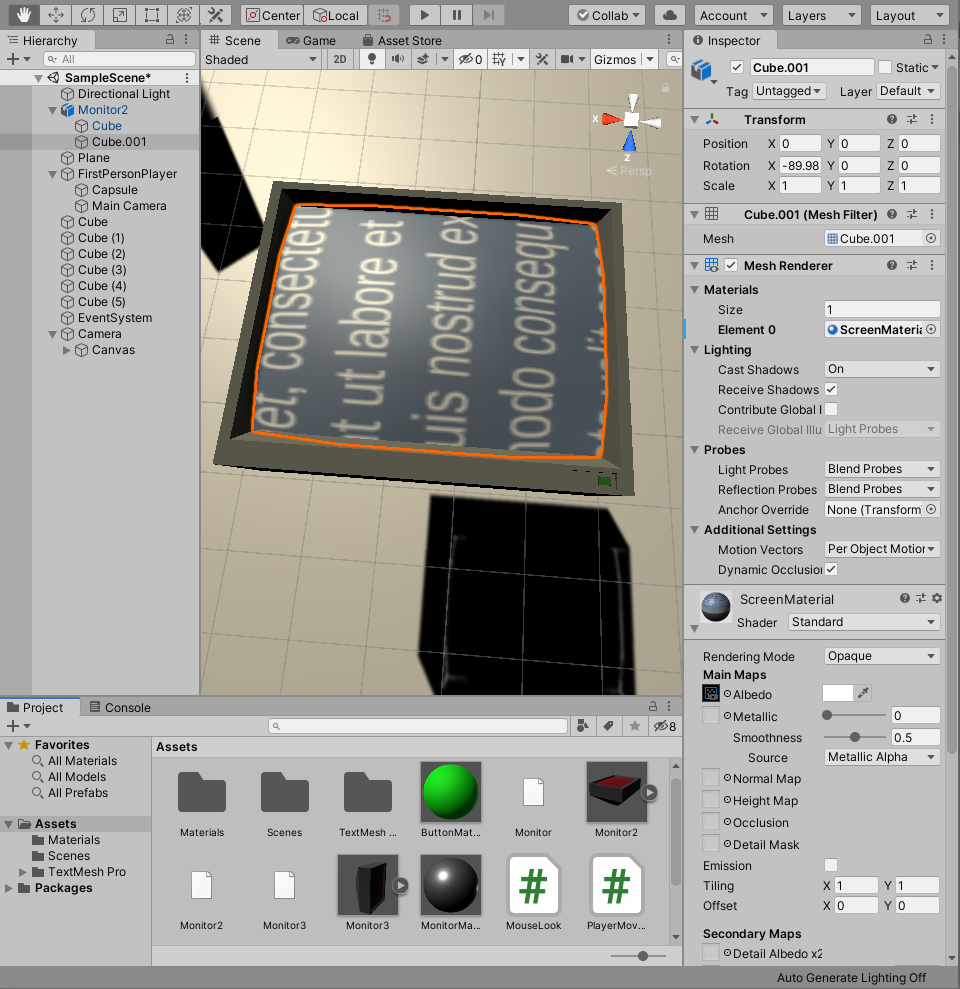 I can't seem to rotate the texture so that it is the right way up to read the text, and only some of the text is visible. I have tried rotating the object 90 deg. clockwise in Blender and "applying" the transform so unity then thinks the object is oriented correctly. this still caused the texture to be rotated.

I also tried exporting as an .obj file, with "Up" set to "Y-Up", but this didn't work. I then tried applying the Render Texture to a material, which I then applied to the screen object which didn't work either. If I apply the texture to a standard cube in Unity, it works fine and is rotated and scaled correctly to fit the cube.

As pointed out by DMGregory, the problem was with the UV Texture Coordinate unwrap in Blender (which I think must have been caused by the way I created the two separate parts of my model).

To reset the unrwap, I selected the faces of my "screen" object in Edit mode, then selected "Unwrap" from the UV menu. (This can also be done by pressing U with the faces selected)

With the UV map reset back to its default, the orientation and scaling of the Render Texture was now correct, and I was able to tweak the exact positioning/scaling of the texture with the Tiling and Offset controls for my material in Unity.

You're making this way more complicated than it needs to be. Create a world-space canvas to display the text, and attach it to the front of the monitor GameObject.

Not the answer you're looking for? Browse other questions tagged unity blender .

4
[Unity] Render an animated texture to a screen
2
How can I create my mesh so that textures applied to it are NOT rotated 90 degrees in Unity 3D?
4
Blender mesh mirroring screws up normals when importing in Unity
1
Textures selectively not applying in Unity
0
Imported Blender modular mesh lighting/shadows issue - Unity
2
Render sprites onto a virtual 640x480 "screen"
0
Single object decreasing frame rate from 60 to 5
5
unity / blender -- positioning items / clothes on character