I have a megaman-style platformer that I've been working on for a while now. I'd like to have my scene set up so that when a player interacts with certain tiles, it will have some sort of effect on the player.

This could easily be achieved with creating individual sprites for the aforementioned interactables, but I'd ideally like to be able to have a portion of my script handle it so that everything besides the player and enemies would be tilemaps.

For instance, I have a tile that would act as a treadmill that moves the player along in one direction. Another tile would be bouncy, and another would deal damage.

If you want to know what tile is at a particular location, you can just ask the tilemap. Then you can use that tile to look up into a mapping of which effect to call: 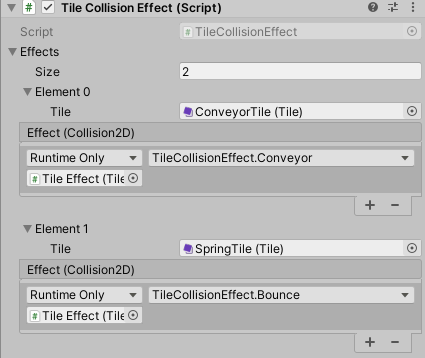 Not the answer you're looking for? Browse other questions tagged unity c# tilemap or ask your own question.

0
How to check what tile the player is standing on?

2
Rending 2D Tile World (With Player In The Middle)
10
Tile map/terrain implementation with differing heights of neighbouring tiles
1
How do I detect and handle collisions using a tile property with Slick2D?
0
Top-Down Tilemap Rendering and Collisions in Libgdx
0
Drawcall Batching with Ambient Occlusion
2
How to efficiently keep the player from moving outside the gameobject he is colliding with?
0
Using raycast to detect whether a wall immediately blocks a player in Unity C#
1
How do I move my infinite runner player when the game zone shares the screen with a match 3 game?