Animator State does not switch immediately through code, even tho all transitions have "Has Exit Time" checked off

first of all, this is my code, I'm prototyping a state machine using Unity Animator (First Time) and I'm stuck coding a simple burst of speed.

The issue is that the player standstill for few second after dashing. So I've added some debug.log and this is the result.

As you can see, the state keeps updating even tho the timer has ran up. It even keeps updating after switching to "Idle" state, tho this ends at some point. I've made sure that all transitions have "Has Exit Time" checked off and the Interruption Source = "Current State".

Note: this is just a prototype and the states have no animations still.

As @DMGregory pointed out, the Issue was that Transition Duration of 0.25 seconds which forced the state to hold until a quarter of a second passes. 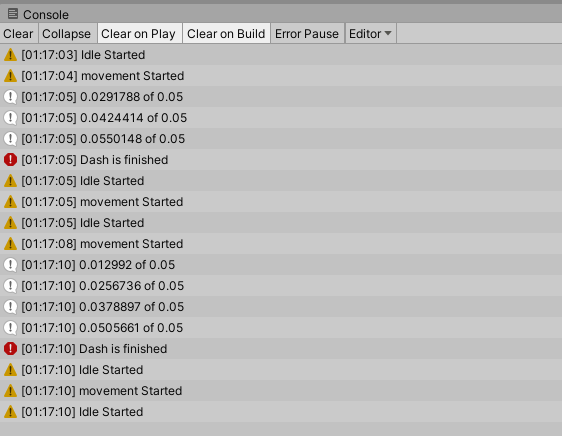 Not the answer you're looking for? Browse other questions tagged unity state animator animation-states .