I'm trying to draw a grid around the cursor that represents buildable area.

this cursor grid, aligns to the global grid. all building placements must be on the grid and so this visual queue must aid in understanding that.

I also will have deforming terrain.

here's what I got so far, this is a grid drawing method that uses GL.Lines :

(by the way I'm using the Cartesian Coordinate system so that's why I iterated over x and y instead of x and z don't let that throw you off, y is not 3D height in the following)

If I call my grid in this way :

But OnRenderObject() is called only once.

This lifecycle will not allow me to have a grid that follows the cursor.

Also it seems that this is a GL.Line hard limit : they cannot be redrawn at runtime.

I realize drawing and redrawing tons of segments as the mouse zooms around is bound to be taxing to the CPU & GPU but I've tampered my expectations :

that should limit the load.

But if there's even more things I can do to optimize I'm open to ideas, so long as it doesn't involve sacrificing correct placement of the lines.

here's what my above code WOULD look like if it rendered at real time : (camera viewing straight down at the terrain, also not at all to scale, the cursor is GIGANTIC in this mock-up) 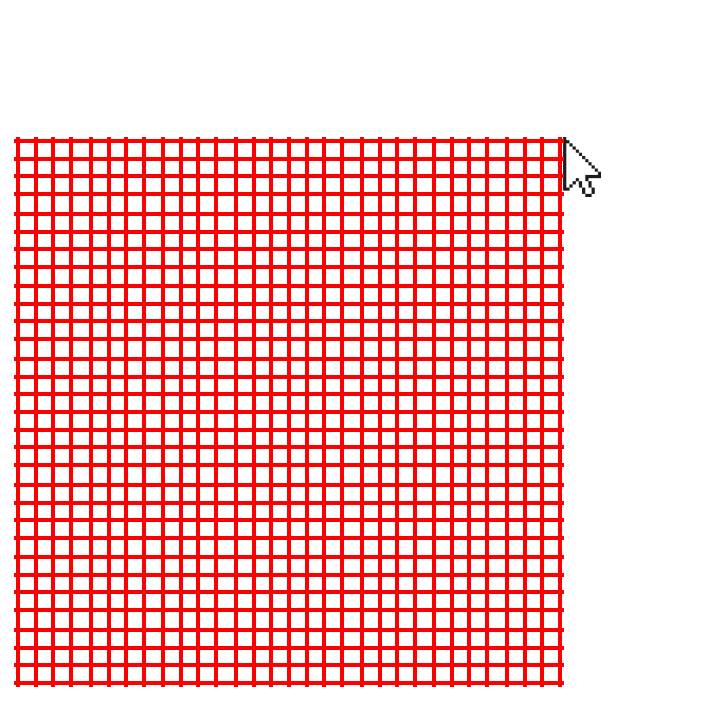 And in the end here's what I'm going to do (draw from -25 -25 relative to grid-adjusted to cursorRayHit and chose a more and more transparent color the further the point are to the center of the grid) : 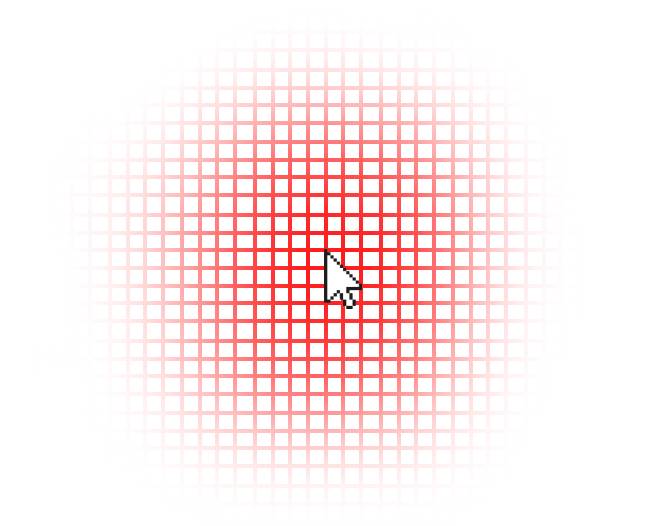 This effect was inspired by this :

And after I get to that step I want to add height variation to match the terrain and then add color input per cell of the grid depending on whether or not the terrain is constructible or not.

So the final solution would look something like this : 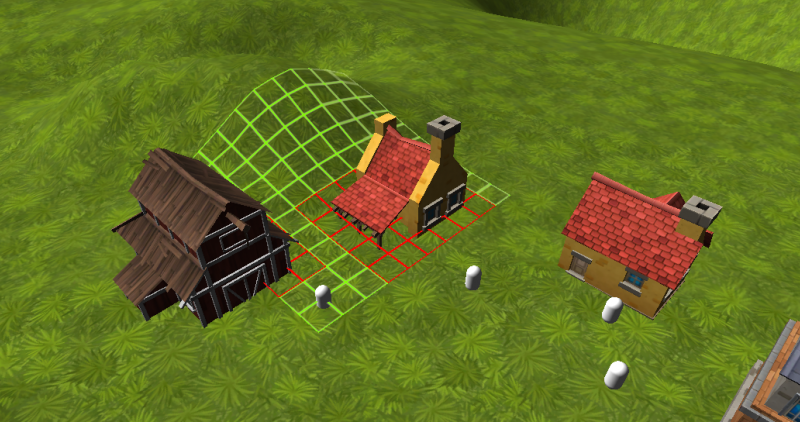 When this question was just about drawing a plain grid of lines, I said...

I'd be tempted to draw this with a shader on a single quad, using the world coordinates of the vertices to snap the lines to your desired intervals, no matter if the parent quad is moving in sub-grid increments.

Here's a quick shader that does this, with parameters to control the exact density of the grid lines, their offset relative to the world origin, their thickness and colour. You can control the size of the fade-out just by scaling the quad that you draw it on.

But now that I have your full requirements:

But we need something more complicated:

So let's unpack that, starting with a bit of prep work:

Finding our place in the world

We start by taking a ray from the camera, through our screen pixel, and extending it as far as the stored depth in the camera's depth texture. That tells us the world-space coordinates of the terrain surface behind this part of the cube.

Then we take the xz components of this world position, and scale and shift them by our grid density/offset to convert into our building coordinate space.

The top section does the same math from the text fragment shader above, taking the building-space point, working out how far this pixel is from the nearest grid edge, and turning that into a brightness/opacity value for our line according to our thickness parameter.

The bottom section takes the worldspace point (before conversion to building space) and transforms it by the inverse of our model matrix to get it into the cube's local coordinates. Then we fade it out radially so you don't see the edges of the cube.

We multiply these two effects to get the resulting brightness/opacity of the line.

The top section takes our building-space position and rounds it to an integer, so all pixels in the square sample the same building mask tile (technically point filtering should do this too, but I have sometimes found discrepancies between the hardware filter's rounding and what I get in the shader, so I like to err on the side of caution)

We then divide this by the size of our building mask texture to get a texture coordinate inside the building mask, and sample from that to find out whether we should draw this tile as green/buildable, or red/blocked.

If we just left it there though, we'd get these ugly/speckly/half-and-half lines where a buildable cell borders a blocked cell. To fix that, the group on the bottom figures out which edge we're closest to, then steps across that edge to sample the neighbouring cell on that side. We'll draw this edge red if either this cell or our closest neighbour is non-buildable.

By default, this will want to draw over all opaque content in your scene, but you can use Custom Render Queue setting to wedge it between your terrain and your buildings. I found setting the grid to render in queue 2501 (AlphaTest+51), and my buildings to render in 2502+ did the trick. If you're using a built-in shader, you may need to create your own material that references it, then put the Inspector in Debug mode to see the Custom Render Queue field: 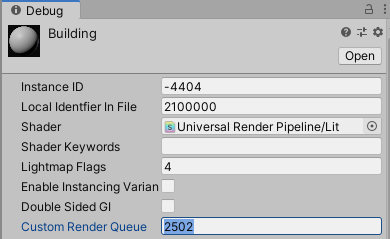 Not the answer you're looking for? Browse other questions tagged unity c# grid or ask your own question.

2
terrain grid rendering problem
1
Reference a single 2d Rectangle in an array
7
Square Grid Polygonal Terrain Query algorithm?
1
Problem with grid generation in Unity 5.1
0
Drawing a grid over a terrain using a mesh - Shader Depth and Z-Buffer
1
How to completely stop the camera from clipping into the ground