I'm following the 2D Roguelike tutorial, which can be seen here. I don't want to get fancy, just follow the existing steps.

I've reached the part where all it's supposed to do is draw the playfield. But it looks like this: 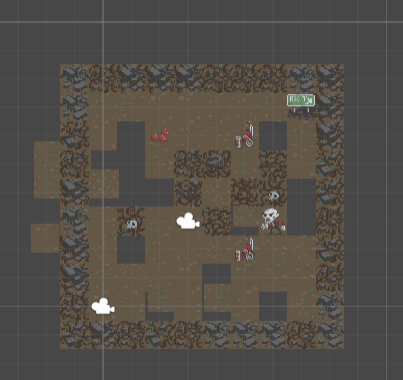 and I don't know why.

Some of the floor tiles are appearing beyod the outer wall, and others are missing (or maybe they're stacked on top of other tiles).

(EDIT: I discovered that the "missing" tiles are because I had the sprites in the wrong layer, and fixed them. I still have several appearing to the left of the outer wall, though.)

I tried to debug it in Visual Studio. The plan was to step through it line by line to see how the tiles are put down, but the debugger doesn't show the playfield until the whole thing is complete.

Browse other questions tagged unity roguelikes or ask your own question.

7
Inconsistent movement / line-of-sight around obstacles on a hexagonal grid
3
Unity2D Isometric layering
1
How to get the GameObject's LayerMask?
0
Synchronize objects' movements moved by coroutine function
2
How to render a single texture across multiple tiles? (Unity2D)
0
How to make wall tiles overlap floor tiles a bit in Unity3D?
0
Improving Rigidbody collision between real-time movable object and other Rigidbodies