Function to draw an image inside a rectangle

How can I draw an image inside a rectangle?

I am introducing myself in the manipulation of images for games, I have a window and inside there is a rectangle that deforms. I would like to fill the rectangle with an image, but I have no idea how to translate the coordinates of the image to the rectangle. I don't want a library function, I want to implement it myself. 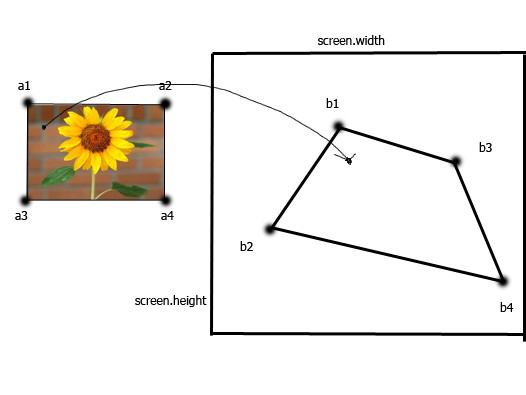 the idea would be to have a function:

I use Java on Windows 7 CPU

You do it backwards.

To derive that matrix, you define that image_position = M * canvas_position, and knowing the coordinates of the corners, you solve the matrix equation.

I explain how to derive such transformation in another answer, in that want we want to fit a model to the image of a QR code, it is the same approach. You probably can work in 2D instead of 3D. Please refer to the demo code there.

Once you have that transformation, you can iterate over the pixels of the target canvas, for each one you query the pixel at the corresponding position of the image and pain it.

Thus, we iterate over the target canvas… You can, of course, go over each pixel, check if it is inside the target cuadrilateral and if it is proceed… however, that will have a lot of wasted effort.

Instead, think of iterating over one axis, and draw the shape segment by segment. That part is easy, you get the minimum and maximum coordinate on the main axis of the corners. Then for each segment You want to know where it starts and ends in the secondary axis.

Alright, what main axis? It could be the vertical or the horizontal. Usually the images are stored such that the next and prior pixel in a row are contiguous in memory. Because of this, making the vertical the main axis will perform better. This means that the line equations for the sides of the trapezoids are going to be the horizontal as a function of the vertical, which is not how we usually see them. And I want to draw attention to that. 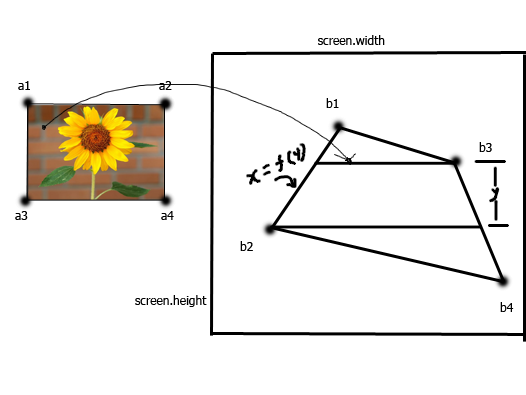 Yeah, this is going to have very bad performance in Java. If done on CPU, you want to manipulate the image memory directly (without the overhead of an API call to read and write each pixel) to have a decent performance. It is, of course, much better to solve the problem in GPU with a fragment shader, where each pixel gets resolved in parallel, with hardware optimized for that, and without taking CPU time.

Not the answer you're looking for? Browse other questions tagged java mathematics algorithm software-rendering image-processing or ask your own question.

2
Relating a point after an image is panned and zoomed
3
How to draw a rectangle or curve between two co-ordinates in libGDX
1
GLSL Processed Image to OpenGL
2
Scale around a point
2
Drawing shapes and images in libgdx dialog
0
Pan camera within bounds of large image
2
Calculate total area of a composition of images
0
How to get a 2D vectorial terrain from an image for Java collision detection?