I am programming a 3D game physics engine that uses continuous collision detection to avoid my objects from being able to "tunnel" through the geometry.

Here is basically how it works:

My problem occurs in this kind of situation: 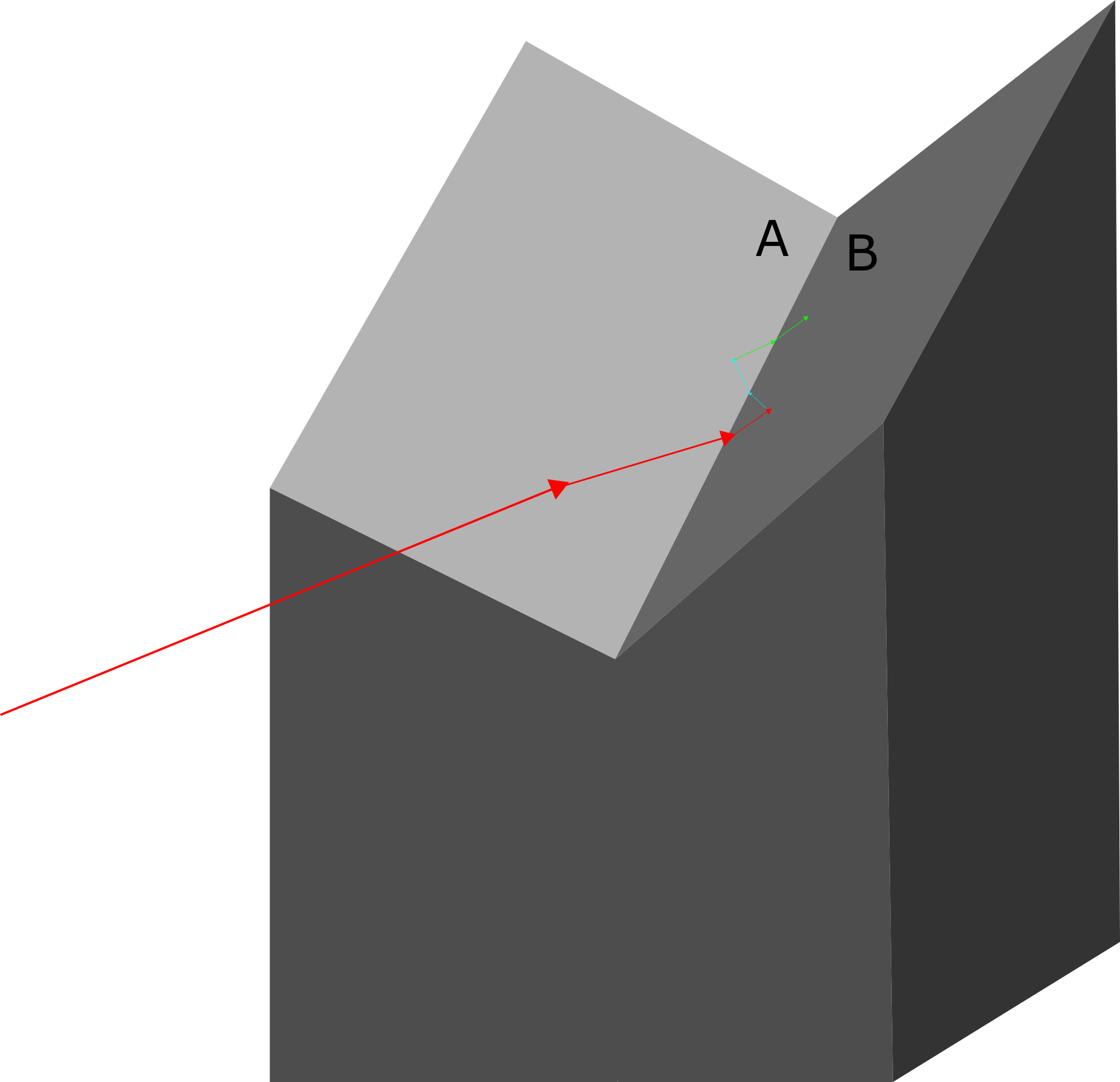 (Do not take into account faces other than A and B, their only purpose is the emphasize the 3D aspect of the shape)

In the first frame, the object first follows the black arrow, then collides face A. It slides correctly on face A (first red arrow) and then climbs on face B (second red arrow). The problem with this algorithm is precisely the fact that it can climb on the opposite face: after several consecutive frames (here the other frames are the cyan and green ones), the general motion will follow the good path (the intersection line of planes A and B), but with a local left-right shaking artifact that I would appreciate getting rid of.

Any idea to solve this would be greatly appreciated.

I had the same problem and I found a solution in the paper "Improving the Numerical Robustness of Sphere Swept Collision Detection" by Jeff Linahan, found here: https://arxiv.org/ftp/arxiv/papers/1211/1211.0059.pdf

In short, your collision response loop should have exactly three iterations:

The above linked paper contains illustrations and explanations of why this works.

Also caveat, the author notes that while this solves the jitteriness, it also increases instances of getting stuck in geometry. He goes on to explain how to mitigate this by tweaking tolerance values in his implementation, but I'm not sure how that would apply to what you're doing.

Not the answer you're looking for? Browse other questions tagged collision-detection physics 3d .

7
How can I implement rectangle collision response?
2
Help interpreting the physics of a rolling ball
4
Collision detection - Smooth wall sliding, no bounce effect
2
OBB Collision Resolution: Jittering with Long Rectangles
8
3D collision avoidance: finding the updated velocity vector (outside the "collision-velocities" cones)
3
Behavior after collision using masks overlap
0
Get a Jump normal gravity based on Attractor Points, lines or Quad placed in the Level Design (in a Mario galaxy like gravity)
3
Swept AABB Collision Detection Conflict with Tile-sized Gaps
0
Does friction only apply in opposite direction of motion?