I'm trying to make a centralized event system for my unity game - a central hub where other parts of the game can register/broadcast their own types of events. This means I have a singleton GameEventSystem that is globally accessible.

This is an example structure: 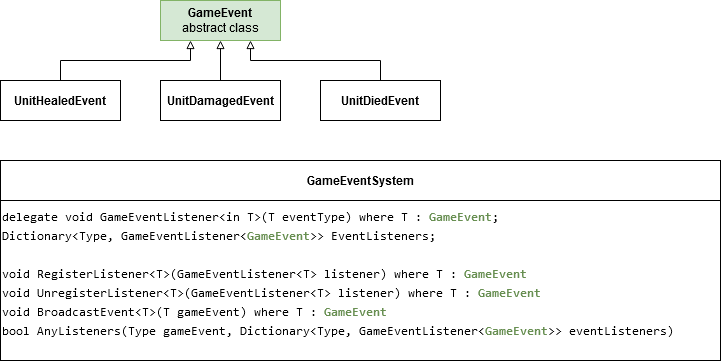 And this would be the UnregisterListener:

Passing an Action<UnitDiedEvent> to RegisterListener will lead to InvalidCastException: Specified cast is not valid., at the following line:

Is there a better approach to achieve a centralized event system in unity?
From my research I can't just make GameEventSystem a static class and expect it to be accessed by the rest of the game objects/components. That makes global systems/managers like this one a little problematic to instantiate and access.

I think I'm not fully grasping events/delegates and generics as a whole to tackle this on my own.

This looks like a situation you can tackle with the curiously recurring template pattern.

First, we'll define a generic GameEvent, that could work on payloads of some unknown type, with static methods to register/unregister listeners who care about events of that type, and broadcast the event to all listeners:

Then we can specialize it by defining derived types of GameEvent<T> where T is their own type:

Now we can register/unregister a listener by calling a static method on the derived event type we care about:

And we can fire the event to all listeners similarly:

And we've done it all without any casting, hashing, or dictionary lookups along the way. :D

As to why your original attempt didn't work, it's because arguments to delegates are contravariant.

We generally find covariance most familiar:

But delegate arguments are contravariant:

Why this difference? Think about what happens when code tries to call someCatAction:

As long as someCatAction accepts an animal, this call is still valid, since all cats are animals. So any System.Action<Animal> is valid as a value for a delegate we want to pass cats to, like someCatAction.

Now think about what happens when code tries to call someAnimalAction:

This call looks valid, since we're calling a delegate that says it expects an animal, and passing it a turtle, which is an animal.

But if somewhere else in your code you were allowed to say this:

...then now the code above is trying to invoke a delegate that expects a cat, but passing it a turtle! So if the variable is of type Action<Animal>, then only delegates that accept all animals (or possible more types) are valid values, because they're the only ones that could handle any invocation that tries to send any old animal down the pipe.

Not the answer you're looking for? Browse other questions tagged unity c# events or ask your own question.

4
Level editor event system, how to translate event to game action
11
Nested input in an event-driven system
12
Could I be going crazy with Event Handlers? Am I going the “wrong way” with my design?
2
pointers to member functions in an event dispatcher
0
How can I regulate update and event frequency?
0
How to deal with events in a game with multiple players, in Unity?
1
How to design parameters for events
0
Unity/C# : How to execute a function after another function has finished its execution?
1
How to implement specific custom events in an Event Condition Action (ECA) game system?
0
Game states and events