How can I implement revolute (hinge) joints in a 2d physics system?

My approach was to extend that given here by implementing the following algorithm:

The algorithm seems logical to me, but I have found that there is some kind of stability issue whereby the bodies will stay constrained for a short time, then as the angle between the two bodies becomes slightly more acute (in either direction), they will both shoot off at high velocity. The number of constraint iterations is not the issue as far as I can tell - the same problems occur at 1 iteration as at 10. 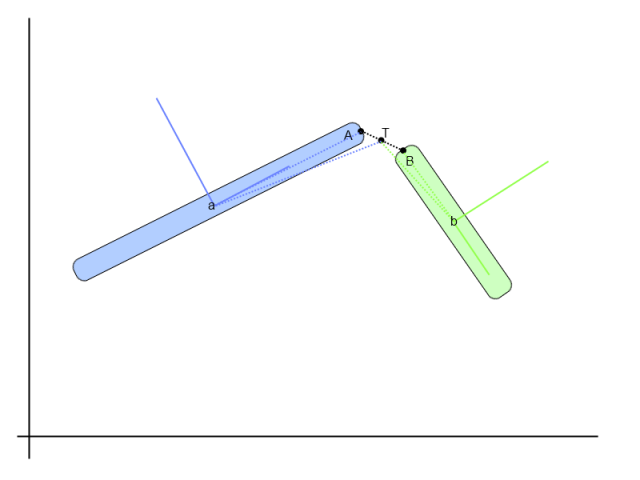 Pseudocode to my algorithm given below:

Am I on the right track with this algorithm? Is there some minor detail I have missed that is aggravating the simulation?

This is an interesting question

Just thinking out load ( well writing it down)

the equal distance between the 2 points is C/2.

mmm. I'v been drawing up to 10 different triangles and I think I come to the same conclusion, that T's position is always ( in 2D)

Maybe this could help ?

Or maybe it is too early and I completely missed the ball :/

As is the way with most things, I had my Eureka moment at 5:30am after roughly 10 hours of debugging, head-scratching, beer-drinking etc.

My error was in the line

This translates the object along the local vector towards the target, but is translated in global space. For some bizarre mathematical reasons that I don't even want to begin to think about, this was fine up to +/- 45 degrees - at which point the sim blew up.

By replacing the line with

We have our hinge joint :)

I think you can’t solve this equation of motion using only kinematic method, Because joint can transfer linear force between each body.

Not the answer you're looking for? Browse other questions tagged physics rigid-body-dynamics or ask your own question.

5
How can I implement fixed joints in a 2D physics system?
1
How would joints work in an impulse-based physics engine?

6
How to calculate the exit speed of ball bouncing off a solid surface
7
What causes Box2D revolute joints to separate?
3
Need help with collision detection/resolution in a 2D simulation of 'worm-like' creatures
5
How can I implement fixed joints in a 2D physics system?
3
Consistent Space Gravity Simulation
4
How to rotate an object along its trajectory path?
1
Targeting with a ballistic gun
0
Hinge joints chain movement (2D)