How can I make my C++ game which installs its own DLL files?

Example: Minecraft is the same single .exe from the moment it's downloaded. Installations occur fairly quickly (very painless) for the selected version.

How can I make my game a single .exe which installs these libraries in the directory I want, if they're not there on execution, and also executes the game? (presumably that's how I imagine it should work).

I think I already made my point, but in essence I want the game to be a single .exe managing all external dependencies.

According to this article by Microsoft, the first place where Windows will look for DLL files is always the directory with the .exe file that requested them. So you don't actually need to install the DLL files. You can just put these files into the same directory as the game executable.

There are multiple topic to discuss here.

It seems like you're over-thinking your requirement when all that you really need is just a simple installer.

Among other thing, an installer can:

Traditionally these functions would be a separate program - often called a launcher - but there's no reason why they can't be rolled into the same program as the installer.

One hallmark of a robust system is that it should be simple and obvious to do the right thing, but more difficult to do the wrong thing: if you're fighting against the system then you're probably doing it wrong. An installer can help you achieve this, particularly for non-technical end-users.

Aside from shipping DLL normally or do an Installer. Another way to create single EXE in hacky way is using App packer 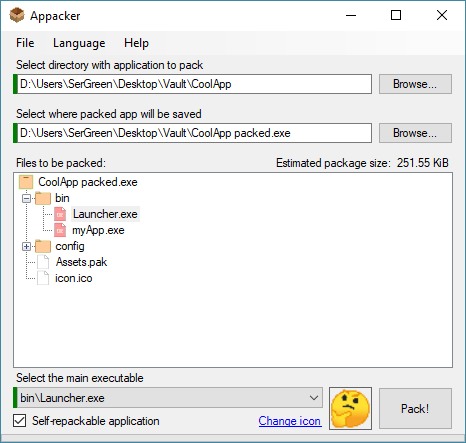 It just create new EXE which encapsulate other resource you would like to pack.

This gives similar result to GameMaker's Standalone EXE option, with all assets packed inside, and probably its dependency (DLL) too.

There might be compatibility issue later, GameMaker itself even trying to phase this feature out.

Not possible natively. The utility that GM used to pack single .exe exports is slowly being depreciated by Microsoft.

single executable's don't work on every platform. Microsoft changed the tool so that something built on windows 8 (and above probably) don't work on anything below that. It's not our tool, we just use the MS one. So this is a horrible choice for a standard tool.

Again, I want to point that, for sane/normal solution, you should normally ship DLL with game exe you distributed. I just give out this answer to let you aware of such approach.

Not the answer you're looking for? Browse other questions tagged c++ installer .

0
Creating a game on Linux with SDL and distributing it

1
How do I make a pointer point to the current running level if each level is its own class?
1
How can I package and read multiple asset files into/from one file?
5
How can I create a pack file / archive for game data files, and then load them? (zlib?)
1
How can I read .TGA and .BLP image files in C++?
0
How to make a windows installer for Monogame/F# game?
15
How can I get rid of "missing DLL" problems?