What name should I give each difficulty level? [closed]

I have a game with 4 difficulty levels (or levels of AI) and I'm wondering what to name them instead of the boring Easy, Normal, Hard, Impossible.

Naming is one of those things that people can spend a lot of time tossing around. A little comedic value always makes it more memorable - for instance, the difficulty levels from Rise of the Triad were more descriptive phrases that gave it a little more character. 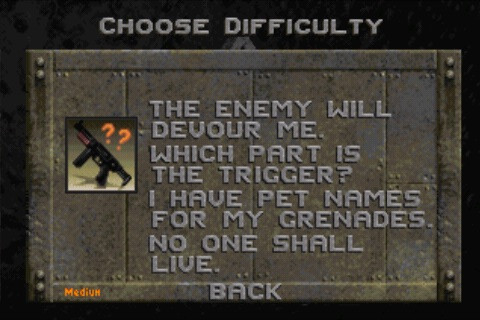 Sean's advice is spot on too - theme them after something related to your game. Here are some examples:

The intended audience is probably the type of kid who likes cars but can't drive yet, so a little attitude to goad (I mean, encourage) them wouldn't be out of line.

Here I use some fairly simple tie-ins with the puzzle type and the descriptions.

A simple way to have the user correlate difficulty with the size of the animal. Much more memorable than "easy" etc. You could sneak in an unlockable "There is no cow level" if you feel snarky enough. This goes back to one-word descriptions too, if you're sticking to that limit.

I'm thinking of something like Earthworm Jim, although I don't think there were more than 2 difficulty levels and I don't remember if they had names either, but this is with that in mind. In this one, my idea was to be completely nonsensical, and try to use names for which there ARE NO correlations to difficulty. The desired affect is to make it more memorable by being silly, and if the players talk to each other, they know immediately what they're referring to which makes it an inside joke and thus more memorable.

Anyway, from these examples hopefully you get idea how to approach it. If you're really stuck, grab a thesaurus and find synonyms for "easy", etc. At least it would be different. =)

I'd say match it to the way you want your game to be perceived. If you want it to come off as a casual game, name them something like casual, normal, tough, hard, etc. If you want the game to come across tougher, name it like gears of war--casual, normal, insane, etc. It's really up to you. Keep in mind that how you name your difficulties will also somewhat affect how the player feels after finishing them. It's much more rewarding to complete "insane" than "hard".

I would avoid "Easy" as that has a negative connotation, and some people who really should choose that setting will avoid it because they don't want to think of themselves as poorly skilled. (Mega Man 2 named its difficulty levels "Normal/Difficult" instead of "Easy/Normal" for that reason.)

Themed level names (as others have mentioned) work in some game contexts, typically when you're working in an established genre where you expect players to be familiar with conventions like difficulty levels. This can backfire if you're not careful; for example, I could never remember which one was easier in Viewtiful Joe's "Child/Adult" difficulties (is Adult harder because adults are older and more skilled, or is Child harder because children always seem to kick their parents' butts at video games?).

I think it's been mentioned several times, but theme it around your game. It could be all nice and inventive to have 'Dumb, Normal, Smart, Genius' but not so great for a racing game.

I used military ranks in a game I developed, from Private (Easiest) to General (Hardest).

I've always been a fan of the naming scheme Conker's BFD had: Inbred, Crap, Normal, Bastard, and Einstein, although like others have said it really depends on the theme of the game.

You could use icons instead, e.g. smileys, but better something closer related to your game. It should remain easily interpretable and maybe still offer a tool-tip.

Not the answer you're looking for? Browse other questions tagged difficulty or ask your own question.

1
Is there a leveling guide somewhere?

14
How is game difficulty tested/balanced?
1
Connect-three game: Increasing level-of-difficulty as play progresses
4
How can I estimate the difficulty of user-generated content in my puzzle game?
5
How can I know how difficult a question is?
0
Incentive for players to choose hard difficulty
3
How can I test if my rage game's hardest levels are achievable?
7
How can I prepare the different difficulty levels for my game?
4
How to determine what difficulty is right for the game?
22
What is the design rationale behind hard content that's limited to only a couple attempts per week?