I've decided to implement my own algorithm for optimal reciprocal collision avoidance. It doesn't use linear programming, but iteratively projecting velocity on intersections of ORCA lines and checks if it is collision-free. It works great for relatively slow units, but fast units tend to stop under certain circumstances.

If anyone is familiar with the concept and can let me know how to deal with the issue, or if anyone has another idea, I'll be glad. 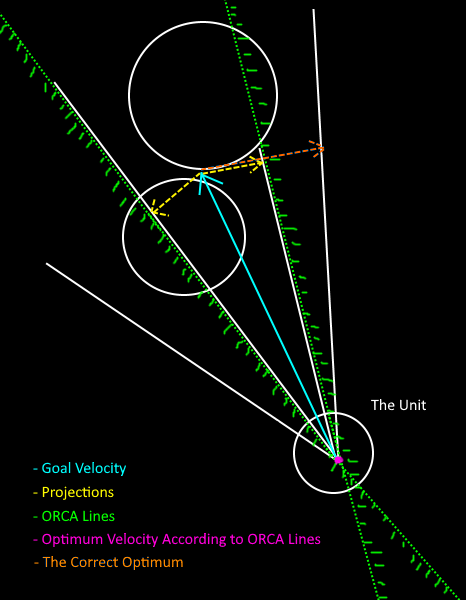 Okay, I've found the problem, and it was written in the original paper, which I missed among all other papers apperantly… I mean, there were tons of papers about it, that, for some reason I never thought of “What about the original research?”

Anyway, if anyone else wonders, it seems that, we are not suppose to use the goal velocity during creation of ORCA lines, but the current velocity of the agent. The reason to that is, the goal velocity is most of the time very big in size, like almost constant, so it has that problem I stated, but the current velocity is more dynamic. For example if an agent can't find a valid collision-free spot and stops or slows down, then in the next turn it will be doing all calculation with that zero or some small velocity, which has much greater chance of finding a solution.

Not the answer you're looking for? Browse other questions tagged algorithm collision-avoidance or ask your own question.

10
pathfinding with obstacles in a Warcraft 3 like game
5
How can I use Rectangle.Intersect() to resolve collisions in XNA?
5
C# XNA: Effecient mesh building algorithm for voxel based terrain ("top" outside layer only, non-destructible)
1
Handling Block Collisions
5
Pathfinding avoid a list of polygon
0
Collision Detection algorithm using Line Detection
16
How is RTS Local Avoidance Done?