Age of Empires had this powerful AGE (Advanced Genie Editor) tool to let players mod the game data with ease. You could see all the game's databases through this tool and play with them to make your own mods in a pretty straightforward way, which I suppose was also used by the devs themselves to author their data. 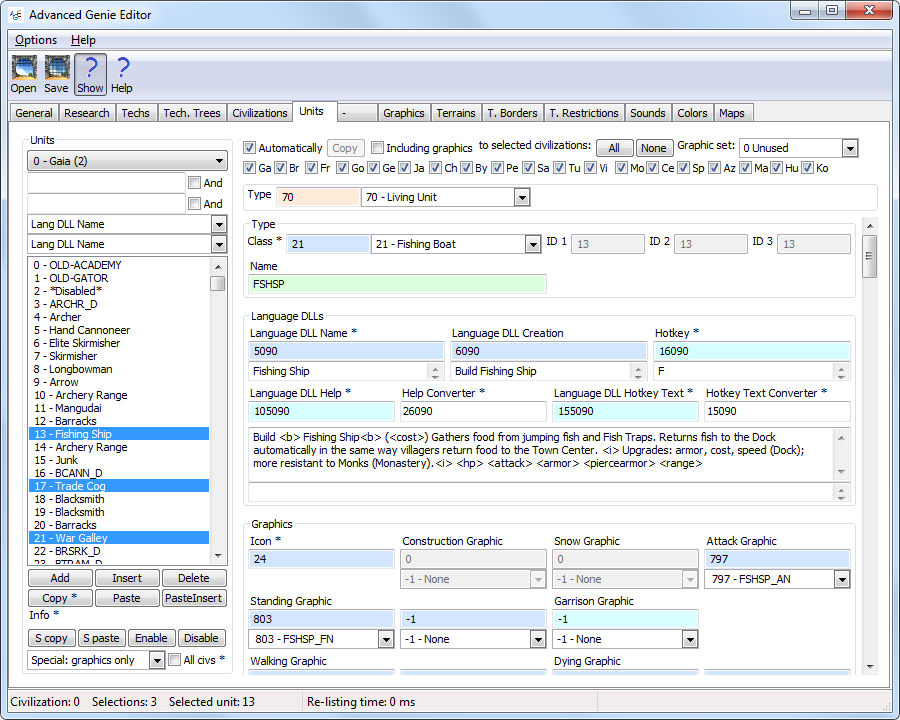 I was wondering how can I implement a similar editing interface for my game database?

Are there tricks like this that Godot, Unity and Unreal users use to author their data? I feel like I missed something because no popular engine seem to support what I'm looking for out of the box.

If I can't do it in-engine, how should I go to make such a tool myself?

All the tool does, I'm pretty sure, is unpack some data files (XML serialization is easy to set up), present it to you in a readable format, and pack the files back up again when you hit the save button.

The game then just uses those same data files while running.

AGE looks like it's made with Windows Forms or one of those other standard Microsoft UI development tools, but making a GUI inside Unity or other game engine is definitely possible. Writing a new GUI may be rather time-consuming though, so just storing your data in a format other people have already made editing tools for (spreadsheets can be great, for some things; XML is tolerable) is probably more practical for an indie game.

Unity in particular actually happens to provide some powerful tools for writing editor extensions and to create game-specific asset types (Scriptable Objects). So you can actually create pretty extensive content management tools tailored to your game within the engine itself.

But if your engine doesn't have such powerful customization features, then it can also be worth the time to create editors for your game data files which are completely separated from the engine. This would require that you pick up a technology stack for creating regular Windows UI applications (if you don't already have that know-how on your team).

The options for that are endless. Pretty much every programming language commonly used in game development has at least one UI toolkit in its standard library. Often there are several options to choose from. For example, if you are using C#, then Windows Forms, WPF, and WinUI are just those which are delivered out-of-the-box by Microsoft as part of the .NET Framework.

If you need any help while creating such tools, then stackoverflow will likely be able to help you much better than we would. The expertise for such toolkits is usually far higher among application developers than among game developers.

7
Can a standalone WPF application create an interface that looks like a Flash interface?
1
Is it possible to skin Qt 4.5 such that it has a 'game-like' interface?
2
Creating a database with special items, like in Diablo
0
database design for a game like "Empires and Alies" in facebook
9
How do "game maker" tools like Blitz3D create .exe files?
2
How to create a new civilization mod for Age of Empires 1 Definitive Edition?
6
Workflow for authoring Pokémon-like game database content