I am working on a game that uses a grid system that allows the player to place buildings in the world. Each cell in the grid is 64x64. All buildings will be a multiple of 64x64, so everything will evenly fit in the the grid.

Below shows an example of a building that is 128x64 and placed at grid position 64x64. The client sends the server the "base" cell, which in this case is 1,1 (@64x64), and knows the building that is being build is 128x64 so it sets both cells to the "occupied" state which means a building is placed in those 2 grids. 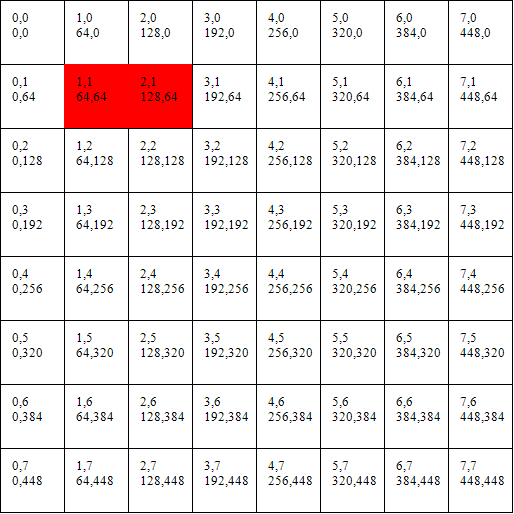 The problem I am having is allowing the client to rotate the building either 90, 180, or 270 degrees.

For example, if the client wanted to place the same building, but rotated 90 degrees, it would look like this: 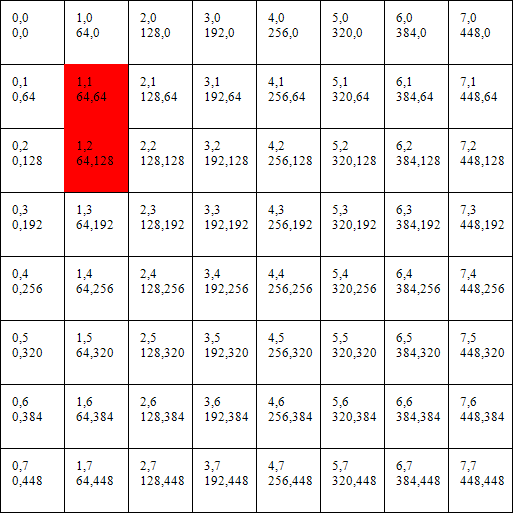 Basically what I am asking is: Given the client sends to server the location to build 64x64, and sends 90 for the rotation, how can I (on the server) figure out which cells are going to be build on?

Currently I am using this code to get the grids, but it doesn't allow for rotation since I have no idea.

Any help would be appreciated.

I have previously implemented something similar for determining placement of items within a 2D grid and hope that sharing my ideas with you will provide some guidance.

It helps to normalise the coordinates for the items being placed into an offset around the origin as well as considering rotations as a fixed step rather than an angle (which you could convert to/from later if needed).

As an example, consider the following shape rotated in 4 different orientations: 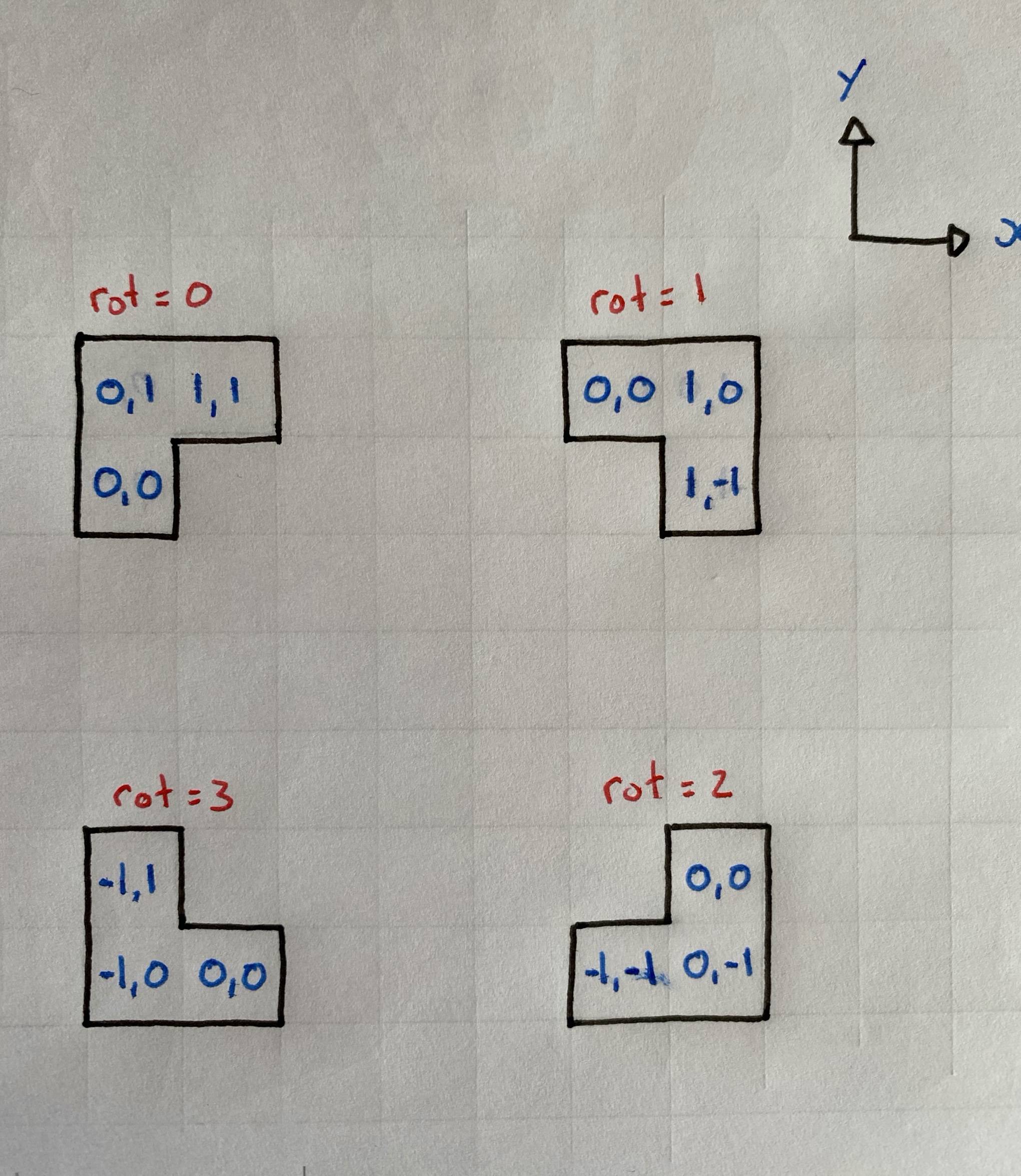 For the original rotation (rot = 0), we simply do nothing and the footprint coordinates remain as is.

For each subsequent rotation we can follow these rules:

Here is an example for the footprints of the above shapes with the appropriate rotation: 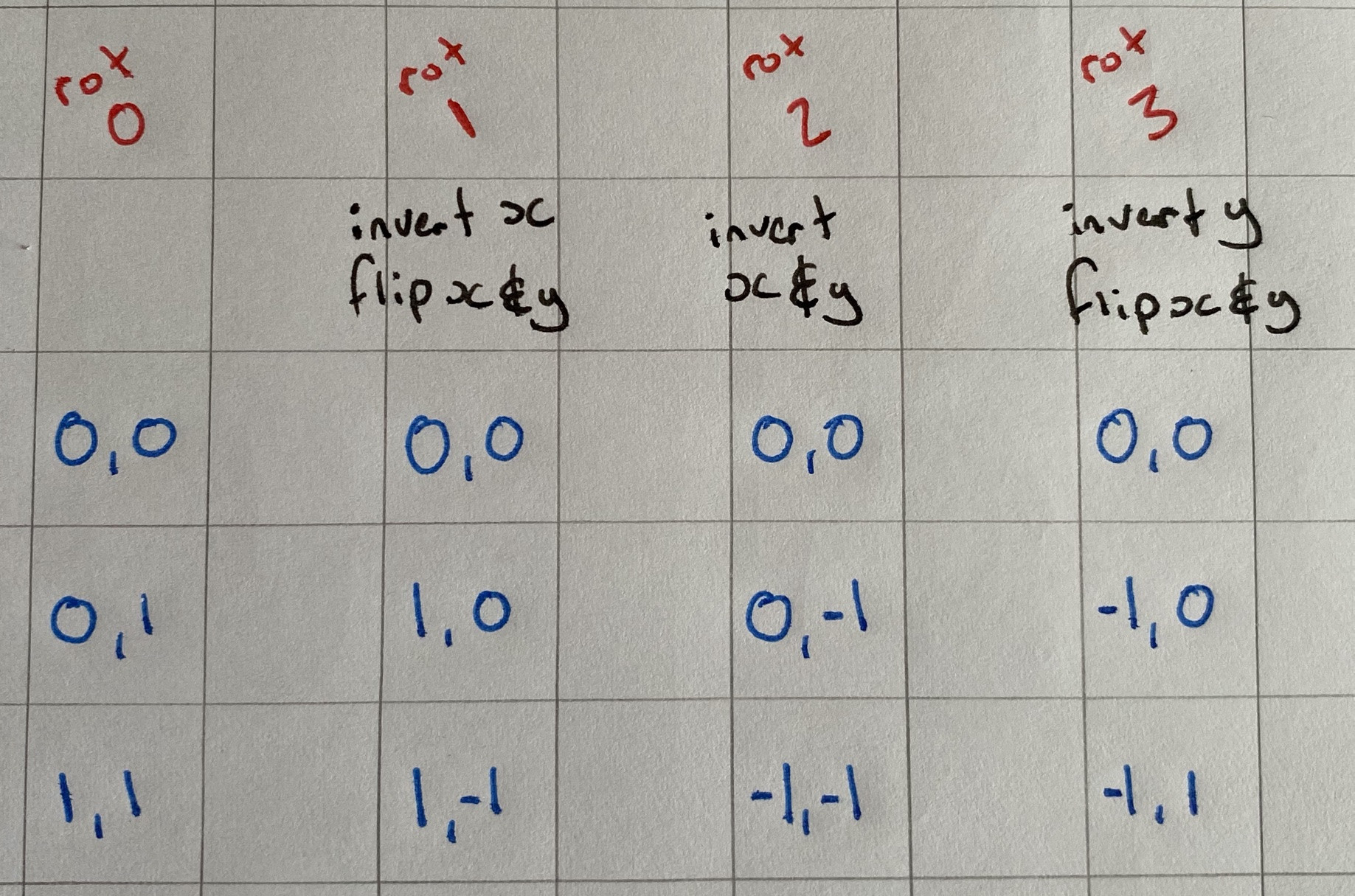 To work through an example of this, given the footprint with rot = 1, we would convert the coordinates as such:

Hopefully this should be enough information to infer the remaining rotations with the aforementioned formulas.

Once you have calculated the new footprint coordinates for your given rotation, these can then be added to your world grid coordinates to determine which neighbouring cells need to be checked in relation to your base cell.

The server has to have the same knowledge of building types that the client has, and needs to know the current rotation and dimension(s).

To keep this information concise in your packets sent up to server, you can use 1 byte for the direction (this is really just an enum type that both client and server code have access to):

Building shape could be either just length (say 1 unit wide x n units long), or length and width, both of which get sent to the server - you can use 1 byte for each of width and height, and later on, use fewer bits to save on bandwidth.

When this arrives on the server, you multiple the rotation factor by 90 degrees or the equivalent radians, then figure out the direction the body length is going to go, and then check whether this collides with existing buildings on the server.

I would suggest for a more compressed layout (optimise only once the basic logic is working):

Not the answer you're looking for? Browse other questions tagged c# 2d grid .

9
How to find 2D grid cells swept by a moving circle?
3
Collision detection on a 2D hexagonal grid
5
Map building grid to planet
6
Is there an efficient way to identify in which run-time generated room a character is, in a non-grid 3D environment? How?
2
How to find grid cells not seen by an object
2
Picking cells which form a completed line between to 2d grid cells
1
Deleting an item in the game world: detecting if an item supports other items
0
How would you go about placing objects between chunks in a 2D game?
11
Ways to draw tracks on 4-connected grid