What does the graphics card do with the fourth element of a vector as the final position?

From this question it appears you would want a four-element position vector, as it is simpler to modify its position with matrix multiplication.

On its own this would imply the fourth element should simply be ignored when considering it as a representation of a 3D point (assuming no transformation), but I know this is not true, as when I supply a vector4 to the GPU, if the fourth element is not one, it is not rendered - why?

What is the significance of the fourth element, once it is in the rasterizer?

EDIT: On review this question was somewhat poorly worded; it would be more accurate for the second paragraph to say: "if the value of the fourth element is not within a certain range, it is not rendered 'correctly'/'as expected'".

The fourth component is a trick to keep track of perspective projection. When you do a perspective projection, you want to divide by z: x' = x/z, y' = y/z, but this isn't an operation that can be implemented by a 3x3 matrix operating on a vector of x, y, z. The trick that has become standard for doing this is to append a fourth coordinate, w, and declare that x, y, z will always be divided by w after all transformations are applied and before rasterization.

Perspective projection is then accomplished by having a matrix that moves z into w, so that you end up dividing by z. But it also gives you the flexibility to leave w = 1.0 if you don't want to do a divide; for instance if you just want a parallel projection, or a rotation or whatever.

The ability to encode positions as w = 1, directions as w = 0 and use the fourth row/column of a matrix for translation is a nice side benefit, but it's not the primary reason for appending w. One could use affine transformations (a 3x3 matrix plus a 3-component translation vector) to accomplish translation without any w in sight. (One would have to keep track of what's a position and what's a direction, and apply different transformation functions to each; that's a bit inconvenient, but not really a big deal.)

(BTW, mathematically, vectors augmented with w are known as homogeneous coordinates, and they live in a place called projective space. However, you don't need to understand the higher math to do 3D graphics.)

Tring to answer to the appropriate comment of Natan, I did some consideration that can be useful to understand what really happens when you use vectors in Affine Space to represent 3D vectors in the standard Euclidean Space.

I will call "vector" - in the sense used in the majority of 3D libraries - when a vector of the affine space has w = 0.

The matrix are used because they let you to represent a linear function in a compact/elegant/efficient form, but linear functions has the major disadvantage that can't transform the origin: F(0) = 0 if F wants to be linear (amog other thing such F(λX) = λF(X) and F(A + B) = F(A) + F(B) )

This means that you can not construct a matrix that do a translation since you will never move the 0 vector. Here comes into play the Affine Space. The affine space adds a dimension to the euclidean space so traslantions can be done with scaling and rotations.

The Affine Space is a projective space in the sense that you can construct a equivalence relation between Affine and Euclidean vectors so you can confuse them (as we did with poins and vectors). All the affine vectors that projects to the origin with the same direction can be seen as the same euclidean vector.

This means that all the vectors that have the same proportions in the coordinates can be considered equivalent:

i.e. every affine vector can be reduced to a canon version where w=1 (we choose among every equivalent vector the one we like best). 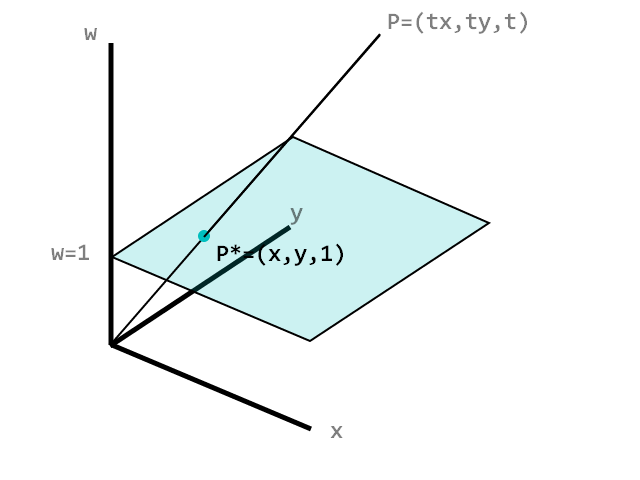 hence the mean of "projective" space; You should notice that here the euclidean space is 2D (the cyan region)

There is a particular set of affine vectors that can't be put in their canonical version (with ease) the one that lies on the (hyper)plane w=0.

We can show it visually: 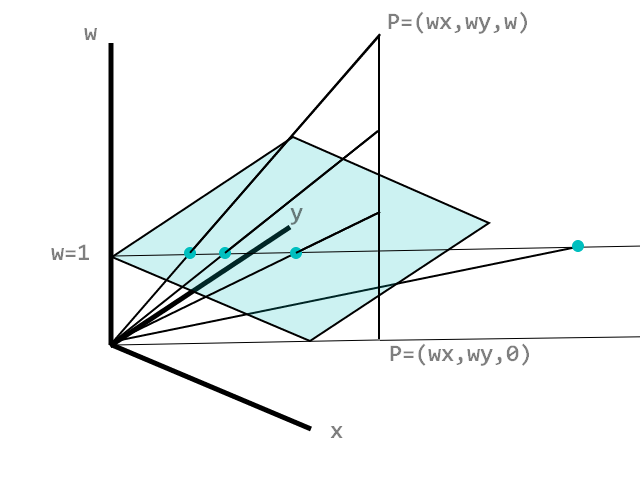 Now is clear that adding up two vectors in the projective space can lead to problems when you consider the sum vector as a projected vector in the euclidean space, this appends because you will sum the W components in the affine space and then project them to the euclidean (hyper)plane.

This is why you can sum only "points" to "vectors" because a "vector" will not change the w coordinate of the "point" this is true only for "points" where w =1: 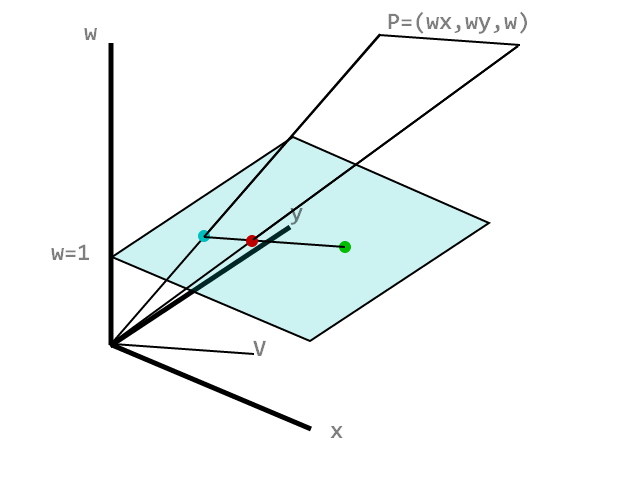 As you see the green point is the one obtained adding the two affine vectors that represent the cyan "point" and the V "vector", but if you apply V to every affine vector in a form different by the canon one, you will obtain a wrong results (the red ""point"").

You see that Affine Space can't be used transparently to describe operation on Euclidean Spaces and the misuse of the term "vector" has sense under the (strict) constraint of compute sums only on canon projective vectors.

Said that, is quite reasonable to think that the GPU assumes that a Vector4 has to have w=0 or w=1, unless you really know what you are doing.

1> It helps us in combining matrices of translation and rotation into one.But you might be thinking what's the use of it we could just multiply translation and rotation matrix and that's it but no there's more to it.If we don't have the w component in all our vectors then when we multiply the 3d vector(xyz) to the combined matrix of translation and rotation in whatever way we will be unconsciously scaling the values with x,y or z( that's how matrix multiplication operates) and this will probably corrupt the position matrix (translation part of combined matrix) due to scaling.To correct this problem 4th component vector is introduced and this component of the vector(w) will hold value 1.0 in 99% of the cases.This 4th component allow us to have unscaled position values(translation).The matrix is represented as->

and then we have the simple yet powerful matrix. :)

2> We copy the z value into w component in the perspective projection stage and divide the x,y with it.This way objects become shorter as they move away from screen.

Not the answer you're looking for? Browse other questions tagged mathematics graphics rendering .

1
What is w componet
1
How to get pixel coordinates between 0,1 from SV_POSITION
169
What math should all game programmers know?
21
Do I need the 'w' component in my Vector class?
13
Why do we need a fourth coordinate to divide by z?
6
When is the Z coordinate normalized in GLSL?
2
2D camera perspective projection from 3D coordinates -- HOW?
2
Should I Include the W-component of a vector when calculating it's length or dot product?

0
Should there be a limit to how many in game models there is for a 3d MMORPG?
1
Calculating a circle or sphere along a vector
6
OpenGL behaviour depending on the graphics card?
0
When entities don't draw themselves, who actually does?
2
What is the correct multiplication order for a 2D matrix?
5
Mixing Perspective and Orthographic Projections?
5
How to render water reflections on multiple heights
0
How to design a system that allows for custom equations of movement?